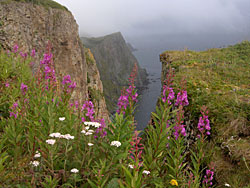 A hike along the cliffs offers stunning views

Located east of the Alaska Peninsula is Sand Point, a community on the northern shore of Popof Island. Though you're on an island, you're not in the Aleutians just yet; Popof is in the Shumagin Islands group, one of many clusters of islands off the Alaska Peninsula Coast. Across Popof Strait, you'll see the mountains of nearby Unga Island, the largest and westernmost of the Shumagins.

Unless you're staying in town, the typical ferry stopover will offer just enough time for a brisk walk into town and back or some more leisurely raptor watching close to the original small boat harbor and along South Harbor Access Road.

When the ferry comes into dock, you will see two roads. South Harbor Access Road leads uphill from the harbor into town past the Harbor Office and Cafe. Watch for bald eagles on the slopes beside the road as well as in the air and trees. In 2006, a nest had nesting eagles with eaglets clearly visible from the road. Numerous eagles also can be seen overhead, including juveniles practicing acrobatics and alighting on the rigging of fishing vessels. 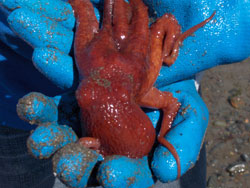 As you walk into town, most land toward the west belongs to a major fish processing plant. Seabirds, crows and ravens, as well as hundreds of bald eagles, are attracted to this area. January and February see the largest concentrations of bald eagles. Migrating whales summer throughout Shelikof Strait.

Long-tailed ducks and eiders, both types of sea ducks, sometimes gather in the harbor basin beside the ferry dock. Sea lions, otters and seals may be seen in the harbor or on Sand Point beaches. Gadwalls have been seen in a slough north of the harbor. Bison, brought here in the 1930s, roam remote parts of the island, though you're unlikely to see them anywhere near the harbor. There is also a petrified forest on nearby Unga Island, most visible at low tide.