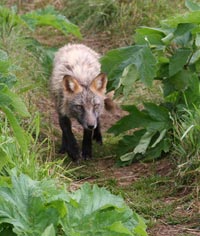 Foxes, as well as bears, may be seen at the Frazer River weir

The largest island in Alaska, Kodiak Island is home to the Kodiak National Wildlife Refuge: a 1.9-million-acre refuge on Kodiak and Afognak Islands, established in 1941 by President Franklin D. Roosevelt “for the purpose of protecting the natural feeding and breeding range of the Kodiak bear.”

As for bears, believe locals when they tell you it’s uncommon to see a bear from the road system. You’ll want to schedule a bear-viewing trip into the refuge to avoid disappointment.

The new Kodiak Refuge Visitor Center in downtown Kodiak is at Mission and Center streets. Kodiak Audubon has created a hiking and birding map, available for purchase at the visitor center bookstore and other Alaska Geographic outlets. This map provides more information on many wildlife viewing stops.

Harbor seals, Steller sea lions, sea otters, porpoises, and various whales are all common along the coast. Endangered northern right whales are among local sightings. (If you have proof of a sighting, report it to the National Marine Fisheries Service Protected Resources office in Anchorage, (907) 271-5006.)

Large, dynamic local wildlife that is somewhat easier to see than bears includes Kodiak’s large resident population of Steller sea lions. One dependable viewing area is on Near Island, at the St. Herman Boat Harbor, also known as Dog Bay, a short drive or cab ride from town. After crossing the bridge, follow the right fork in the road down to the harbor parking lot. A float anchored inside the breakwater is a haulout area for Steller sea lions. Be cautious; they can come close!

Researchers conduct monthly aerial surveys of the animals as well as collect the animals’ scat to learn about their diet. Let the animals keep to their diets (wild salmon in fall, capelin in winter)—feeding the sea lions is against federal law and can bring you a $300 fine in Kodiak. It’s also a bad idea, since the animals can become aggressive and demand food.

Also on Near Island is the Kodiak Fisheries Research Center. Kodiak is a major fish processing center for the region and research related to its resources is critical. The general public is welcome to visit the center’s 3,500-gallon aquarium of local species, including crabs, fish, and giant sea stars. There is also a touch tank to get you up close with marine invertebrates—and appreciate just how cold that water is! 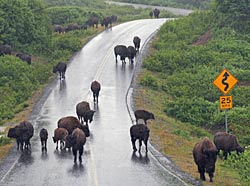 Bison roam freely on the road near Fossil Beach

Fewer than 100 miles of road cross Kodiak Island, mostly unpaved. A drive in any direction provides quick transport into remote wildlands. Sitka black-tailed deer, an introduced species, are plentiful along all roads. The region boasts several sites recognized by the National Audubon Society as Important Bird Areas; a third of the world’s population of black oystercatchers winters in Chiniak Bay.

Close to town, Buskin River State Recreation Area is a popular destination for fishing, strolling the beach, and birding. Stroll with care in brushy areas; during salmon runs, this is one place where you might encounter bears.

Anton Larsen Road takes you by green hillsides topped with rocky cliffs, where the sharp-eyed scoper can find families of mountain goats. Those with a one-track mind might see many “bears” along the way. However, most, if not all, may turn out to be something else—from moss-covered logs, to horses, to bison. Yes, bison actually do roam here, in the fields near Fossil Beach, a fascinating area where you can watch the ocean work away at fossil and shell-encrusted cliffs. 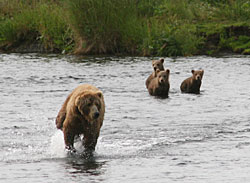 Three little bears get a fishing lesson from mom

Brown bears are Kodiak’s wildlife superstars. A unique subspecies, Kodiak’s Ursus arctos middendorffi are the largest brown bears in the world. A large male Kodiak bear might stand five feet high at the shoulder while still on all fours. On hind legs, it can reach 10 feet tall. And Kodiak has more brown bears per square mile than virtually anywhere. Sounds hard to miss, doesn’t it?

If you head out from the ferry hoping to catch a glimpse of a bear along the Kodiak road system, you probably won’t. There’s a lot of real estate here, and the bears know the land better than you do. One of the reasons the bears thrive here is they have plenty of space and high-quality food.

The three main islands making up the Kodiak archipelago are Kodiak, Afognak, and Shuyak, in an area spanning about 5,000 square miles. In that same area there are about 3,000 bears and about 14,000 humans, both of whom prefer not to share the same living space.

It’s possible that you may happen upon a Kodiak brown while on a hike or while visiting a salmon stream around the town of Kodiak. But that’s far from the most dependable (or safest) way to spot one. Viewing bears in specially designated areas is better and safer for humans and bears alike, and you’ll likely see more bears in a single location than you would on your own.

With some advance planning, you can obtain a bear-viewing permit for one of several developed viewing sites in the area: Brooks Falls/Katmai National Park; the McNeil River State Game Sanctuary on the Alaska Peninsula; and Kodiak National Wildlife Refuge, managed by the US Fish and Wildlife Service. You might also charter a local guided tour, air taxi or charter boat, or arrange to spend time at a private remote lodge.