This section of the Kougarok Road crosses broad flat river valleys with wide floodplains that are unique to the interior portion of the Seward Peninsula. The lowlands with poor drainage have thermokarst features in the form of pingos and polygons that develop when ice layers force their way to the surface of the soil. After crossing the Kuzitrin River valley, the road enters the interior uplands, characterized by broad rounded hills with sparse vegetation and deep rounded valleys with vast expanses of tussock tundra habitat. The summer climate can be hot enough to generate thunder storms and lightning strikes from these localized storms may commonly start tundra fires in this area. Some summer days have hazy skies due to tundra fires burning in the distance. The fires create ash that fertilizes the thin layer of soil and produces lush white areas cotton grass during the blooming period of late June.

Use binoculars to scan the rock cliff directly across the river from a large camp for a pair of nesting rough-legged hawks. 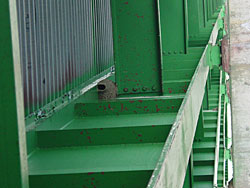 The Pilgrim River crossing brings you close to the groves of cottonwood, also known as balsam poplar, that are abundant in this section of the valley. The presence of warmer soil associated with ground water springs in this portion of the valley contributes to the growth of deciduous trees. A lower understory of tall dense willow and alder attract birds that are similar to those found at Pilgrim Hot Srpings and often associated with boreal habitats. This area has great horned owl, alder flycatcher, varied thrush, yellow-rumped warbler, and blackpoll warbler. In the flood zone near the bridge there are numerous beaver dams that block the side sloughs and make ponds used by a variety of water birds. The bridge railing is used as a perching area by Arctic tern and gulls when they rest between feeding flights above the river. 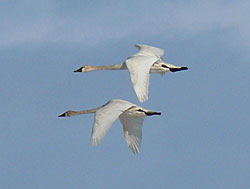 Tundra swans
Past the Pilgrim River Bridge, the road continues uphill and offers sweeping views of a network of lakes and the meandering Pilgrim River. To the right of the Pilgrim River drainage a large hill rises up from the lowlands with a series of granite rock outcrops on top. It is known as Hen and Chickens Hill because of how it appears from certain angles. A cross at its summit can be seen with binoculars. It was placed there in memory of a priest who died in a blizzard on his way to the Catholic orphanage at Pilgrim Hot Springs.

The second of these two lakes is named Swan Lake but both may hold similar birds. 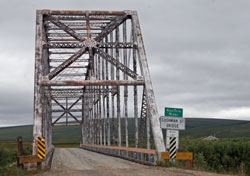 Farther upriver at the confluence with the Kougarok River are the remains of sod houses. Local Inupiat once used the camp to catch and preserve whitefish, prized for its flavorful meat and high oil content.

The Seward Peninsula Railway ended upriver from the bridge. The terminus was originally at the town of Shelton, but after ice repeatedly destroyed the bridge, the company moved it to Bunker Hill where a ferry carried people and equipment across the Kuzitrin River. A road on the other side led to Taylor and other gold mining areas.

History of the bridge

The Kuzitrin Bridge was originally named the Cushman Street Bridge and was built in 1917 to span the Chena River in the heart of downtown Fairbanks. The bridge was disassembled in the late 1950s, to be replaced by a concrete span, and shipped down the Chena, Tanana and Yukon Rivers where it was then barged up the Bering Sea Coast to Nome. Workers hauled the sections up the Nome-Taylor Highway and reassembled the bridge in its current location in 1958.