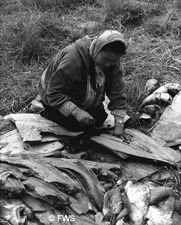 Humans have been part of the tundra ecosystem for thousands of years. The indigenous people of Alaska's tundra regions are the Aleut, Alutiiq, Inupiat, Central Yup'ik and Siberian Yupik. Originally nomadic, Alaska Natives have now settled in permanent villages and towns.

Today, Alaska natives strive to successfully combine the demands of a contemporary cash economy and the Western system with their traditional knowledge and thousands of years of cultural, spiritual and subsistence practices.

In the past 50 years, we have begun to see big changes in the tundra as the result of modern human activities. Disruption of permafrost by roads, the establishment of permanent communities, oil and mining operations, and other developments can cause localized but lasting damage to tundra life.

On a larger scale, tundra is affected by all corners of the globe. "Arctic Haze," an increasingly common weather phenomenon, forms when large northern air masses pick up pollutants from industrialized areas and carry them to the arctic.

The tundra ecosystem is vulenerable to "bio-accumulation," a process wherein pollutants and pesticides that enter from distant regions become concentrated in the arctic as they move upward through food chains-from plankton to fish to large marine mammals. At each stage the pollutants become more concentrated, especially in the fat of the animals-a highly valued food of many northern peoples.