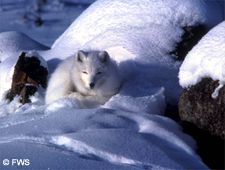 Long, luxurious summer days, and long, bitter winter nights... Springtime explosions of plant growth and insect abundance, and early autumn killing frosts... Gentle rains, and fearsome winds... Animals of Alaska's arctic tundra ecosystem have a lot to deal with throughout the dramatic northern year. Some animals take advantage of summer's abundance-and avoid winter's perils-by migrating elsewhere for the winter. Those that remain have unique adaptations to help them thrive year-round.

Many mammals have specialized coats to ward off the winter cold. Caribou have hollow hairs that trap warmth close to their bodies. Muskoxen are so well insulated with underfur that they have little trouble with cold, even in the fiercest blizzards.

Since bodies with long legs, ears, and tails lose warmth faster than those with shorter limbs, many arctic animals, such as arctic fox and arctic hare, have evolved more compact bodies than their southerly counterparts to better conserve heat.

Many tundra animals grow more slowly, and reproduce less frequently, than do their non-tundra relatives. Tundra-dwelling lake trout may take ten years to reach maturity, compared to six years for those in more southern regions.

Arctic fox and ptarmigan, along with arctic hare and ermine, are camouflaged according to the season, changing from winter white to summer brown, and back again, each year.

Two tundra animals-arctic ground squirrel and grizzly bear-hibernate (spend the winter in a state of deep dormancy, where heartbeat and respiration slow) to escape the hardships of winter.

Small mammals, such as tundra voles, lemmings, ermine, and shrews can't hibernate. Instead, they rely on the snow layer to insulate their tunnels and nests. In some places, snow insulation is so good that tundra-dwelling lemmings are able to breed in the winter. 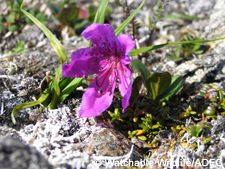 Plants, too, must deal with the cold of winter (which most do by going dormant). But they also must adapt to the relatively cool summer, the shortness of the growing season, chilly soils (cooled by permafrost), and frequent winds.

Because of the short growing season, most tundra plants are perennials-they spend several years gathering and storing nutrients between each episode of seed production. Many can reproduce by sending runners through the soil, sprouting new plants at the nodes. This is less costly than blooming and producing seeds and fruits.

To deal with cool summers, the flowers of Arctic dryad and Arctic poppy revolve slowly throughout the long days, catching the sun's rays like tiny satellite dishes.

Some plants, such as wooly lousewort, protect themselves from wind, desiccation, and cold by growing thick "fur" that is made up of thousands of tiny, curly hairs.

Some tundra plants, such as Labrador tea and Arctic dryad, retain old leaves rather than dropping them. This conserves nutrients and helps protect the plant from cold, windscour, and desiccation. Other plants, such as Kamchatka rhododendron, achieve extra protection by growing in dense mats or cushions.

Some tundra plants, such as arctic birch, are considerably tougher than their non-tundra relatives, and are able to survive in harsher conditions. They have also evolved a prostrate growth form, enjoying the extra warmth trapped in the boundary layer just above the ground surface.