You are here: ADF&G Home » Habitat » Restoration and Enhancement
Sign in
myADF&G 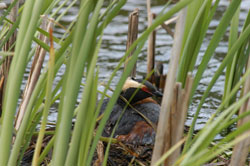 In 1986 and 1987 the department partnered with Ducks Unlimited to construct small scale nesting habitat for waterfowl. These projects were completed at Palmer Hay Flats State Game Refuge northeast of Anchorage and Creamer’s Field Migratory Waterfowl Refuge in Fairbanks. Their purpose was to test the feasibility of more extensive habitat enhancement projects, and for their educational value. Nesting habitat was created by excavating several ponds which were interconnected with channels. Islands were constructed within each pond to provide predator-free nesting habitat. A number of species have been documented using these areas, including Canada geese, northern pintail, sandhill crane, mallard and northern shoveler.
Visit Palmer Hay Flats State Game Refuge and Creamer's Field Migratory Waterfowl Refuge for more information. 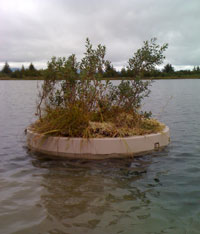 The Dusky Canada Goose breeds primarily within the vast wetland complex on the Copper River Delta (CRD) near the town of Cordova in south-central Alaska. The 1964 earthquake significantly changed this nesting habitat by altering drainage and allowing terrestrial predators access to nest sites. Increased predation resulted in a significant population decline. In 1984, an artificial nest island program was initiated on the CRD to increase nesting success. Nests on these artificial islands are twice as productive as nests at natural mainland sites. Currently there are 330 islands in place and more are planned. This work is being conducted through a multi-organizational effort including Chugach National Forest, Oregon Department of Fish and Wildlife, U.S. Fish and Wildlife Service, Ducks Unlimited, U.S. Geologic Survey – Biological Resource Division, and the Alaska Department of Fish and Game.
Visit Copper River Delta Critical Habitat Area for more information. 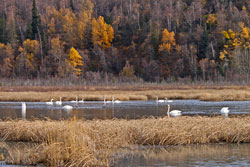 Potter Marsh is a coastal freshwater and brackish wetland located at the southern end of the Anchorage Coastal Wildlife Refuge. The marsh was inadvertently created in 1916 when the Alaska Railroad built an embankment across a tidally influenced shallow cove in Turnagain Arm. Since that time, the impounded cove transformed into the 540 acre wetland we see today and it supports a wide variety of waterfowl, shorebirds, fish and other wildlife. Several boardwalks at the edge of the marsh provide wildlife viewing and educational opportunities to tens-of-thousands of visitors. As early as the 1970s and as recently as 2007, ponds of various depths were excavated in the marsh to create open water habitat for a wide variety of bird species including dabbling and diving ducks, and shorebirds. Visit the Anchorage Coastal Wildlife Refuge for more information.