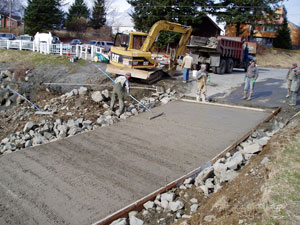 This project site is located at Portage Cove Harbor in Haines Alaska. Haines is only one of two communities in Southeast Alaska that has road access. Skagway is the other road accessible community about 15 nautical miles to the north. This facility provides marine access to Chilkoot Inlet, Lutak Inlet, Taiya Inlet, and Lynn Canal. The Portage Cove Harbor Boat Launch was originally built by the Alaska Department of Transportation/Public Facilities (DOT/PF) and is over 30 years old. The normal design life for this ramp would have been 15 years, so it is expected to be in tough shape. It had all the characteristics of being beyond its design life, broken concrete slabs, bad erosion, and exposed rebar. Although the ramp was still usable, launchers risked trailer and vehicle damage. This facility also lacked a boarding float, which made launching that much more tedious for anything larger than a small skiff. This facility also lacked any good parking in the immediate area. The Haines Borough was also in the process of expanding their existing harbor and it was decided that the best spot for the boat launch would be located along a new proposed section of breakwater. However, the proposed harbor expansion was several years away from completion, so it was decided to complete a band-aid repair to the existing marine launch. The idea being this would keep the launch ramp open and safe at a much reduced cost until the new site was ready to develop.

This project was to overlay the existing marine launch ramp with cast in place concrete and extending it to a +0.6' mllw. 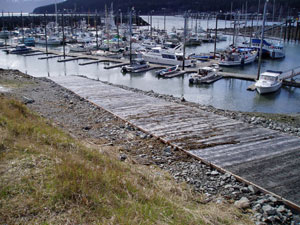 Construction went smooth and was completed by the summer of 2006. The facility repairs allow the site to remain functional, safe, and even improved usage time due to extending to a +0.6' tide. Although these improvements have benefited recreational boaters and anglers, this 'Band-Aid' repair will not meet Haines' long-term need for a new ramp, which meets current and future increased use.