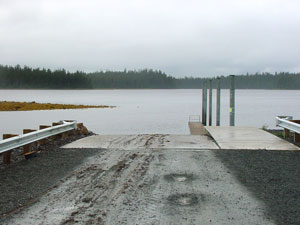 The city of Craig is located on the west coast of Prince of Wales Island and is the largest community on the island. At the time of this project, Prince of Wales Island was one of the region's fastest growing sport fisheries, and their existing ramp was inadequate to handle the large number of marine recreational boaters/anglers. With a very small ramp approach, unusable at low tides, and no associated parking, this ramp often became congested during high use times. This project was designed to create a second launch ramp with associated parking in the Craig area.

The main objective of this project was to construct a one lane boat launch ramp with a large associated parking area and moorage float to accommodate the large number of recreational boaters in the Craig area.

The project was completed in December 1999 and was open to the public for the 2000 summer season. This facility includes a one lane concrete ramp, moorage float, and associated parking for 50 vehicles with trailers. The city also constructed a restroom facility on site with their funding shortly after ramp completion. This facility has become quite popular with both local and nonresidents, and according to the local harbormaster, the congestion that frequently occurred at the original launch ramp has been eliminated. This facility is operated and maintained by the City of Craig.