In 1989, the Exxon Valdez oil tanker spill brought world attention to the fragile beauty of Prince William Sound (PWS). An offshoot of the oil spill criminal and civil litigation was the creation and funding of the Marine Recreation Program (MRP) within Alaska’s Department of Natural Resources (ADNR), Division of Parks and Outdoor Recreation (DPOR). The goals of the MRP include making improvements to various State Marine Parks in PWS in an effort to contain and control human impact on the sites and provide easier and more enjoyable camping experiences. The MRP also works towards providing upgraded sanitation and primitive camping facilities within State Marine Parks in PWS where minimal or no facilities currently exist. With hundreds of miles of undeveloped shores and generally clear water, PWS offers a variety of recreational fishing opportunities. Sport fisheries are primarily marine in nature and target salmon (both wild and stocked) and bottom fish. The vast majority of recreational boaters and sport anglers utilizing PWS launch out of the port of Whittier. Road accessibility was provided to Whittier for the first time in June 2000 via completion of an Alaska Department of Transportation and Public Facilities/Federal Highway Administration road project. The new road provides boat access to PWS within a one-hour’s drive from Anchorage, the largest city in the state. This project helped improve two remote, boat-accessible camping areas within State Marine Parks (SMP's) in PWS. The sites are located in Surprise Cove SMP on the northwest side of Cochrane Bay, approximately 13 miles by boat from Whittier, and at South Esther Island SMP on the northeast side of Lake Bay, approximately 21 miles by boat from Whittier. 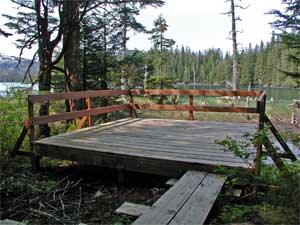 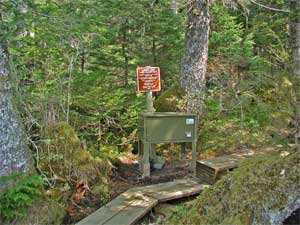 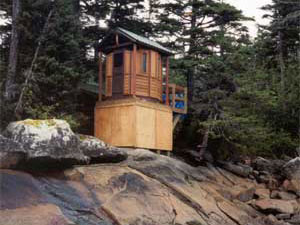 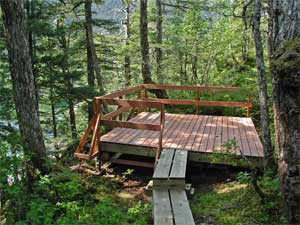 The objective of this project was to develop primitive camping improvements at both sites that included tent platforms; pit latrines, bulletin boards and signage, bear-proof food storage lockers, and limited trail improvements in the form of boardwalks

The Surprise Cove location was completed during the summer of 2000. The site received four tent platforms, a pit latrine, bear-proof food locker, bulletin board and signage. The majority of South Esther Island/Lake Bay improvements were completed by the summer of 2001 except for the latrine, which was installed in 2003. Improvements include four tent platforms, bear-proof food locker, a pre-fabricated vault latrine, bulletin board and signage. The improvements at Surprise Cove and South Esther Island/Lake Bay provide camping amenities that minimize human impacts and create a more enjoyable, remote camping experience. Prior to this project, the natural settings of the sites were not conducive to easy, comfortable tent camping. Improvements provided by this project have enhanced the previously constructed boardwalk trail systems and encouraged responsible use by a wide variety of recreational boaters, campers, and sport anglers.