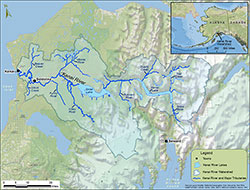 Kenai king salmon enter the river beginning in May each year and these early-run fish predominantly spawn in tributaries of the Kenai River whereas late-run fish that enter the river in July and August, spawn mostly in the mainstem of the Kenai River. There are subsistence, personal use, commercial, and sport fisheries that harvest Kenai River Chinook salmon in Cook Inlet and inriver. The Personal use and subsistence fisheries are the smallest harvesters. The commercial fisheries consist of a set gillnet fishery along the beaches of Cook Inlet and a drift gillnet fishery that operates in central Cook Inlet. The sport fishery is typically conducted from boat both inriver and in the marine; however, some shoreline fishing takes place. The majority of the harvest of early run fish is attributed to the sport fishery whereas most of the late run fish are caught in the sport and commercial fisheries as well as the personal use and subsistence fisheries. Annual harvest rates for the early- and late-run stocks are generally less than 40%, relatively low as compared to other monitored Chinook salmon stocks along the Pacific Coast. 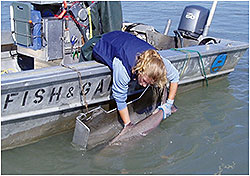 In 2015 the department began managing the Kenai River king salmon stock using a new sonar station located at river mile 14. This site is located above the previous site and above tidal influence, and in theory, produces more reliable estimates of inriver run over time. In 2017 the department adjusted the spawning escapement goals from goals based on king salmon of all sizes, to "large fish" escapement goals based on king salmon 34 inches in length and larger. The goal for king salmon entering the river through June is 3,900 to 6,600 large fish and the goal for king salmon entering the river after June is 13,500 to 27,000 large fish. In additional to age, sex, and length composition samples gathered from commercial, sport and inriver test fisheries, the sonar is the primary tool used for inseason management and assessment of this stock. For more information call (907) 262-9097.

Spawning escapements of early-run Kenai River Chinook salmon, 1986 to 2019. Escapements and goals through 2016 are germane to all fish and thereafter are based on large fish.

Spawning escapements of late-run Kenai River Chinook salmon, 1986 to 2019. Escapements and goals through 2016 are germane to all fish and thereafter are based on large fish. 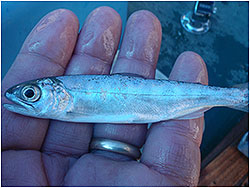 When Chinook salmon smolt are injected with coded wire tags, they are also marked with adipose fin clips.

Historically, attempts have been made to estimate the abundance of juvenile Chinook salmon in the Kenai River but those programs were met with limited success. Currently there is no program in place to estimate juvenile abundance, so estimates of marine survival are not possible. The 2013 Chinook Salmon Stock Assessment and Research Plan recommended an annual project to estimate juvenile abundance in the Kenai River by run (early and late) but this work was considered a low priority by staff and resources were concentrated on adult sampling projects. 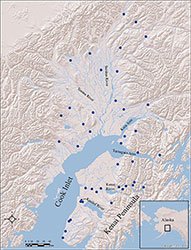 Adult Chinook salmon returning to the Kenai and Susitna rivers in Southcentral Alaska provide both sport and commercial harvest opportunities in several marine and inriver fisheries. Each year, the Alaska Department of Fish and Game assesses these returns by conducting research to estimate run sizes in both the Kenai and Susitna systems through weirs, sonar, creel surveys, harvest sampling, or mark-recapture techniques. Recent low Chinook salmon runs in both river systems have heightened concerns about stock-specific harvests in mixed-stock marine fisheries. Fortunately, recent advancements in genetic stock identification techniques of Chinook salmon allow for discriminating between discrete Chinook stocks in mixed-stock fishery samples. These advancements led to the development of a genetic baseline database for Cook Inlet Chinook salmon using collections from 42 locations and other stocks in the Gulf coast of Alaska. 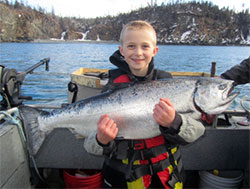 Sport fishing for Chinook salmon occurs year-round in Cook Inlet marine waters though most of the harvest occurs during the months of April through August. The majority of this marine harvest is landed in the ports of Homer, Anchor Point and Deep Creek / Ninilchik. Past attempts at estimating the stock-specific harvests of Chinook salmon in the central Cook Inlet marine sport fishery using coded-wire tags were incomplete due to low precision of estimates and poor or limited tagging of wild Chinook salmon stocks. The stock-specific harvest of sport caught Chinook salmon out of Homer is also poorly described. Since the 1990s both fisheries have been sampled for maturity and age, sex, length composition information and also for coded-wire tag recoveries, but not for genetic stock identification purposes. Recent estimates of the number of Chinook salmon harvested each year in these fisheries averages about 6,587 fish. Three distinct Chinook salmon sport fisheries in Cook Inlet marine water are described in regulation. There are two summer fisheries which take place from April through August with one in Upper Cook Inlet north of the Latitude of Bluff Point and one in Lower Cook Inlet south of Bluff Point. 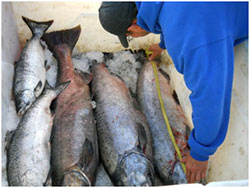 The third fishery is commonly referred to as the winter fishery that occurs the remainder of the year and includes all Cook Inlet marine waters. Biological compositions and genetic stock composition in these fisheries was assessed from 2014 through 2018. The genetic results were broken down into three different Cook Inlet genetic reporting groups and one other reporting group stocks from stocks outside cook inlet throughout the north pacific. During these years, the Outside Cook Inlet reporting group comprised the vast majority of the harvest sampled in all three fisheries. Cook Inlet stocks represented 14% (397/2,902) and 4% (337/8,121) of the total harvest in the Upper and Lower Cook Inlet summer fisheries, respectively. In the winter fishery, Cook Inlet stocks were essentially non-existent which makes sense as these fish are still maturing in distant marine waters.

During and after East Side set gillnet fishery openings, Alaska Department of Fish and Game technicians sampled available Chinook salmon for genetic tissue, age, sex, and length composition information, and coded-wire tags at receiving sites for fish processing plants after each tide. Technicians collect as many Chinook salmon samples as possible, at as many receiving sites as possible, many sites being sampled more than once. Chinook salmon genetic samples were collected from 2010 to 2019 from fish harvested and sold from the East Side set gillnet fishery. A mixed stock analysis was performed on tissue samples collected in 2010, 2011, and 2013 to 2019; however, an analysis was not performed on tissue samples collected in 2012 due to small sample size. Geographic locations within Cook Inlet were identified to apportion the sampled harvest, which were: "Kenai River mainstem," "Kenai River tributaries," "Kasilof River mainstem," and "Cook Inlet other."

Results from the mixed stock analysis of harvest samples revealed that, on average, Kenai River mainstem Chinook salmon composed the majority (71%) of the East Side set gillnet Chinook salmon harvest. Prior to these analyses and lacking stock-specific harvest estimates, the harvests were treated as though all Chinook salmon harvested in the East Side set gillnet fishery were of Kenai River mainstem (late-run) origin even though it was known that other stocks, such as Kasilof River mainstem spawning fish, were harvested. In 2013, sampling was increased to allow for time and geographic stratification of stock-proportion estimates. Sampling of this fishery for mixed stock analysis will continued until Alaska Department of Fish and Game can confidently assess the variation in stock proportions with respect to geographic and timing characteristics of the harvest.

Genetic composition by reporting group of Chinook salmon harvested in the East Side set gillnet fishery.