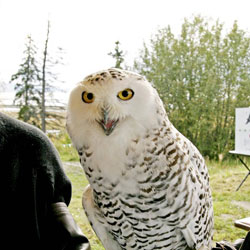 Thanks to Harry Potter’s owl, Hedwig, the snowy owl is currently enjoying a bout of Hollywood celebrity but even our cave-dwelling ancestors seem to have been entranced by its fierce ghostlike beauty, which they captured in cave paintings in Europe. The snowy owl (Bubo scandiacus) is the northernmost, the heaviest, and the most distinctive owl in North America.

In summer, the snowy owl lives along the northern margins of the arctic tundra, spending much of its time perched silent and still on prominent lookouts, patiently waiting for prey. Its meal of choice during the breeding season is the lemming, which it locates either visually or by sound even in dense grass or under thick layers of snow, before swooping in on long wings to grab the small rodent in its talons. An adult owl may consume three to five lemmings a day.

The snowy owl is silent except during breeding season when the male will give a low, hollow booming sound and puff out his throat in a territorial display. Mated pairs are fiercely protective of their nest, even against wolves. The owl migrates in winter to southern Canada and the northern half of the contiguous United States.

These magnificent owls have yellow eyes, a black beak, and a blanket of feathers covering their legs and feet. Only the male is completely white.