In compiling this list, our experts considered scores of locations from the Copper River Delta where millions of migrating shorebirds congregate in spring to Alaska’s northernmost city of Barrow and its small but prized selection of birds. Limiting the list to ten spots, however, meant leaving out such choice spots as the Yakutat forelands, a narrow corridor visited annually by hundreds of thousands of migratory birds. You can learn about Yakutat birding at the U.S. Forest service web page. The Yukon Kuskokwim Delta is another bird magnet. Ornithologist Roger Tory Peterson referred to this land as the “super tundra” because it is so full of birds. Download our brochure and checklist for Birding in Yup’ik Country (PDF 2,080 kB) to learn more. Attu Island at the very tip of the Aleutian Chain, once considered “the” place to go for Asian vagrants, didn’t make the list because it has become quite inaccessible since the closure of the island’s U.S. Coast Guard base. Consider our “top ten” a starting point as you plan your Alaskan birding adventures and keep your ears open for more opportunities. 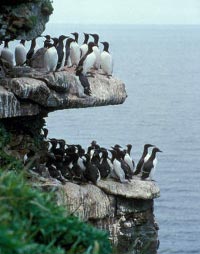 The fabled seal islands of the Bering Sea lie about 200 miles (320 km) north of Unalaska. They were included in the Alaska Maritime National Wildlife Refuge in 1984 in recognition of the global importance of their seabird nesting sites. Vast colonies of seabirds (an estimated 3 million) nest on the islands, including thick-billed murres, common murres, least auklets, parakeet auklets, horned puffins, tufted puffins, black-legged kittiwakes and most of the world's population of red-legged kittiwakes. Over 220 species of birds have been sighted on the islands, migrating from as far away as Siberia and Argentina. The cliffs of St. George host one of the largest seabird colonies in the northern hemisphere. St Paul and St George have airports, tourist facilities, and some roads.

The city of Nome is fronted by the Bering Sea coast and surrounded on three sides by tundra. As the ice begins to break up in spring, migration begins. The Seward Peninsula contains valuable nesting areas for many bird species including most North American waterfowl. From mid-May until the snow flies, usually at the end of October, 350 miles of roads are open allowing unparalleled access to the surrounding lands and several small villages. Birding in Nome is excellent during the summer months with about 200 migratory species arriving or passing through from May 15th – June 15th and again in the fall as the cranes and swans exit.

The Nome Convention and Visitors Bureau has information on logistics and bird watching. 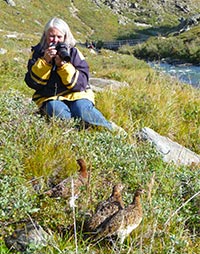 Birdlife in Denali National Park and Preserve includes migratory birds from all over the world and a hardy group of residents. The abundance varies by season with a significant increase in spring as migrants return to Denali. Summer birding allows visitors to view these migratory species in a spectacular northern environment. Birding in winter is slim by comparison but has its rewards in the form of pine grosbeaks, mixed flocks of ptarmigan, and perhaps a gyrfalcon or northern goshawk. Of the 167 species of birds recorded in Denali, 149 occur regularly and 119 are believed to nest there.

Gambell, at the northwest corner of St. Lawrence Island, is located in the Bering Sea over 230 miles west of Nome. In early June, puffins, auklets, murres, kittiwakes, eiders, loons, and other birds pass by “The Point” outside of town either migrating to their arctic breeding grounds or heading for nearby nesting areas on Sivaquaq mountain. Gambell is also renowned for birding rarities. Visitors may see emperor goose, ivory gull, Ross’ gull, common ringed plover, various stints, ruff, common cuckoo, brambling, bluethroat, red-throated pipit, yellow and white wagtails, and McKay’s bunting.

The fjords and rugged islands of Kenai Fjords National Park are rich with denizens of Alaska’s marine world. Murres, kittiwakes, puffins and other seabirds perch and nest along cliff faces just above the swells. The park contains shallow bays and estuaries, and deeper marine habitats. Regional currents drive nutrients into outer Resurrection Bay, making that area especially rich in fish and an early location for spring bloom of plankton and algae. Cliffs and rocky shores create nesting sites for birds and haul-out areas for marine mammals. 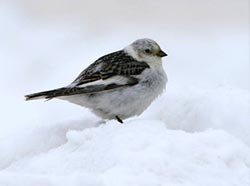 Barrow is the northernmost city in the United States. Although the diversity of birds is somewhat small, the selection is richly rewarding. All four species of eider ducks migrate along the coast and nest in the tundra around Barrow along with numerous other ducks and waterfowl. Barrow is also prime habitat for many shorebirds. Among the most spectacular visitors to the area are the giant snowy owls. The Inupiat name for Barrow, Ukpeagvik, translates as "place to hunt snowy owls," but now Barrow is the place to observe and study these owls instead. Barrow is the only spot in America one can reliably expect to see the elusive Ross's gull, which shows up, sometimes in great numbers during the last week of September through the first couple of weeks of October.

About 240 species of birds have been recorded in the park and preserve. The high diversity and abundance of birdlife is due to the variety and extent of favorable breeding habitats available within the park. These areas contain plenty of food for birds and have low numbers of land predators. Each species has distinct seasonal patterns, but birds are generally most abundant from May 1 to mid-September. Seabird colonies hatch young by late June, and most have left by September 1.

Learn more about bird watching in the area at the National Park Service website.

Adak is the westernmost municipality in the U.S., located about half way down the Aleutian Chain about 1,200 miles (1,930 km) southwest of Anchorage. Bird in the Aleutians is fun and challenging because of the chance to see a unique species. The high winds in Adak are a blessing for birders, blowing in many vagrants from Asia and elsewhere. Forty-four of the 182 birds on the island’s checklist are typical of Asia. Resident shore birds abound, and eagles are ubiquitous. The island attracts a variety of birds to habitats that vary from marine waters to barren mudflats to high alpine tundra. Birdwatching is best at low tide and during early morning and late evening. Species abundance varies with the season and weather conditions. Adak and Dutch Harbor are pretty much the only places to go to see whiskered auklets.

An expansive wetland fed by six glacial river systems, the Copper River Delta is known for its tremendous wildlife and fisheries habitat. Shallow ponds, intertidal sloughs, braided glacial streams, sedge marshes, willow thickets, and stands of spruce and cottonwood are sprinkled across the delta and backed by the Chugach Mountains. Waterfowl abound, including mallards, pintails, widgeon. and teal. The delta is the only known breeding area for dusky Canada geese and also supports more than ten percent of the world population of trumpeter swans. Each spring, an estimated 12 million shorebirds, the largest gathering of shorebirds in the western hemisphere, stop along the shores of the Copper River Delta on their way to more northern nesting grounds. Concentrations of up to 250,000 shorebirds per square mile have been observed feeding on the tideflats during peak migration periods from late April through May. In the fall the Delta is a staging area for waterfowl preparing for their flight south. 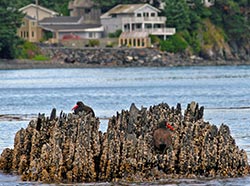 Find information about Kodiak at the chamber of commerce website.