Bird Viewing
The All Stars — Raven 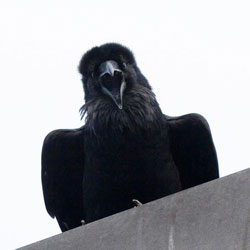 The common raven (Corvus corax) is anything but an ordinary bird. The raven is among the smartest of all birds, a magnificent acrobatic flyer, the largest species of songbird, the largest all-black bird in the world, and an endless source of fascination to man throughout the ages.

Crossing overhead with easy flowing wing beats and a raucous kaw, the raven is a year round resident of Alaska and nests from the Seward Peninsula and Brooks Range, throughout the mainland, and down the Aleutian Chain and Southeast Alaska archipelago.

These big, glossy birds thrive among humans, following hunting parties into the wild in hopes of a quick meal or robbing unattended garbage cans in town. They learn by watching, use logic to solve problems, and interact playfully with each other and other animals. Young birds are fond of playing games with sticks, repeatedly dropping and diving to catch them in midair. Along with their trademark kaw, ravens produce an amazing assortment of sounds, including mews, whistles, “glooks” and the delightful “plop” of a water droplet in a pail.

Common in the myths, poetry, and literature of many cultures, the ravens’ spiritual importance to Native Alaskans is still recognized. The Tlingit, Haida, Tsimshian, Bella Bella, and Kwakiutl viewed raven as the creator of the world and the bringer of daylight, as well as an incurable trickster. The raven is also the frequent subject of myth among the Inupiaq people of the north.