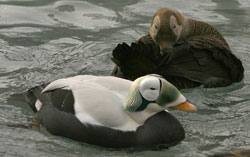 Both sexes have markings that resemble huge pale goggles, or spectacles, around their eyes. The spectacled eider (Somateria fischeri) breeds on Arctic tundra in Western Alaska on the Yukon-Kuskokwim Delta, along the northern Alaskan coast from Wainwright eastward to Camden Bay, and around several deltas in Siberia. These sea ducks molt in shallow waters near the shore then congregate in the Bering Sea south of St. Lawrence Island for winter, often on pack ice with openings, over waters as deep as 200 feet.