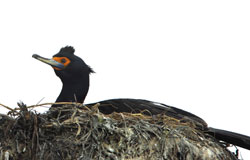 This shy medium-sized cormorant with blackish plumage nests in small, widely dispersed colonies on steep, inaccessible cliff faces. Never venturing far from the sea, the red-faced cormorant (Phalacrocorax urile) comes to land only to breed or roost. Breeding occurs in a narrow band from the Gulf of Alaska to the central and western Aleutian Islands, through the southern Bering Sea to Russia and on to the northern Sea of Japan. In Alaska, there are also nesting sites on the Pribilof Islands and in Norton Sound. The species is not migratory. A few winter observations indicate that adults and immature birds disperse and feed near their breeding areas.