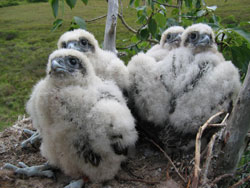 This formidable bird is the largest of all falcons with a wing span stretching as much as four feet across. The gyrfalcon (Falco rusticolus) has three color phases: black, gray and white, although gray is most common in Alaska. It flies with short rapid wingbeats and does not soar for long periods.

The gyrfalcon is found in open country, tundra, and mountains throughout much of Alaska and nests on rocky ledges. Breeding pairs do not build their own nests and often use a bare cliff ledge or the abandoned nest of other birds, particularly golden eagles and common ravens. The gyrfalcon’s only natural predator is the golden eagle, which rarely engages with the it. Ravens have been known to pick off gyrfalcon eggs and hatchlings.

Gyrfalcons prey on large birds (mostly ptarmigan) and some mammals ranging in size from voles to hares. It is capable of flying at tremendous speeds and usually dives down onto prey on the ground. Most gyrfalcon prey is found with a broken breast bone.