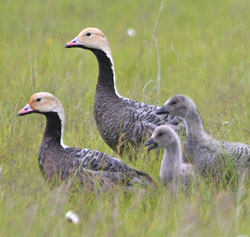 A small blue-gray goose with a round body and white head, the emperor goose (Chen canagica) breeds primarily in western Alaska’s Yukon-Kuskokwim Delta, and parts of Russia flanking the Bering Strait. In winter, the majority of the population moves to the Aleutian Islands seeking ice-free beaches. A few rare individuals have been found along the Pacific Coast south to California.

The population declined drastically in the 1970s and 80s. Little is known about the cause of the decline, but the population currently seems to be on the rise in Alaska.