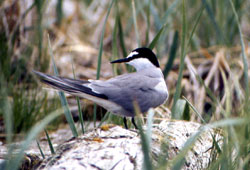 Feeding primarily on small fish, the Aleutian tern will locate them by sight and use one of three fishing techniques. It may swoop and pick from the surface of the water, hover and dive, or sit on the surface and dip. An excellent flyer, terns also snatch insects in mid-air.

The Aleutian tern breeds in wide ranging coastal colonies only in Alaska (from the Kasegaluk Lagoon along the northwest coast to Glacier Bay) and eastern Siberia. The largest colony (an estimated 1/3 of the population in Alaska) is believed to nest on the Yakutat Forelands in the Gulf of Alaska.

The winter range of the Aleutian tern is largely unknown. Although Alaskan and Siberian populations are not well monitored, both are thought to be in decline.