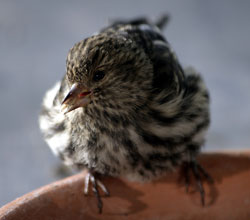 The pine siskin (Carduelis pinus) is a finch with brown streaked feathers and a touch of yellow. These tiny acrobatic birds roam in tight flocks usually high in the tree canopy. They are known to hang upside down on the tips of conifers plucking seed from hanging cones.

Pine siskin are among those species commonly associated with winter irruptions. That means that while they typically spend the winter in a particular geographic region, they may shift into other locations, usually following a cyclical pattern. For birders, this sudden influx of large numbers of birds that usually winter elsewhere can be quite dramatic and exciting.

Scientists believe that irruptions are driven by a lack of food on the normal wintering grounds. At the Cornell Lab of Ornithology, they have enlisted the general public’s help to find out more about why irruptions occur. Click on Cornell’s Irruptive Bird Identification Guide to learn more.

Pine siskins are very vocal. Calls include a high pitched rapid chittering as well as a fast buzzing. They are common in Southeast Alaska but have been seen on rare occasions in coastal areas around the Gulf of Alaska.