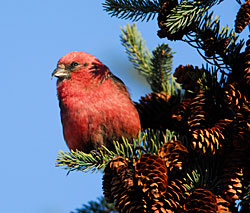 The red crossbill (Luxia curvirostra) is easily identified by its oddly-shaped bill, which helps it pry open the tightly-closed scales of cones to reach the enclosed seeds. Placing the tips of its bill between the scales, the crossbill bites down. As the crossed tips push the scale up and expose the tasty morsel inside, the bird uses its tongue to work loose the seed.

A stocky finch with a red-orange body and dark brown wings, the red crossbill breeds in areas with an abundance of cones. Breeding is closely tied to the availability of food and the birds wander widely in search of a good crop. The crossbill, which feeds the seeds to its young, can breed even in winter as long as cones are plentiful. The larger billed birds prefer pinecones and smaller billed birds prefer spruce cones.

Crossbills take grit and salt from roads to aid their digestion.

Both red and white-winged crossbills live in Alaska, most commonly in Southeast. Their bill shape and calls vary widely.