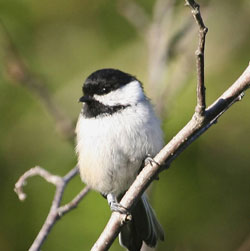 A tiny inquisitive bird with a short neck and a big head, the black-capped chickadee (Poecile atricapillus) typically lives in the forested regions of Alaska. They are a common though fleeting sight at bird feeders, flying in to grab a seed and quickly moving on to eat it elsewhere.

Black-capped chickadees stick around all winter, even as far north as Fairbanks with its frigid 18-hour nights. Stuffing themselves with frozen insects and seeds during the brief daylight, the tiny birds gain 10 percent of their body weight in fat each day and burn it at night. Scientists, by using M&M-sized transmitters strapped to the birds’ backs, have found chickadees roosting in birch trees, crammed into tiny spaces under the bark where they puff out their feathers, turn down the thermostat, and burn fat all night. Read a more detailed account of the chickadee study at the Alaska Science Forum.

Chickadees that live farther north, like the Siberian willow tit of Russia’s Arctic and the gray-headed chickadee of Alaska’s Brooks Range, live in largely treeless areas, and where they roost at night is still a mystery.

In recent years in Alaska, a striking number of black-capped chickadees have been seen with beak abnormalities, such as grossly overgrown and crossed beaks. Since research began in 1999, more than 2,000 have been observed in south-central Alaska alone – the highest concentration of abnormalities ever recorded in a wild bird population. Scientists are studying these birds to try and figure out where the deformities are occurring and why. They suspect that the factors responsible are unique to Alaska and the Pacific Northwest. The public can help by reporting sightings of such birds. More information on the deformity and how to report a sighting is at the Alaska Science Center website.