The Sport Fish Division and the Gene Conservation Laboratory have implemented a breeding program to produce sterile fish for stocking lakes and streams to enhance angling opportunities. It is important to ensure that hatchery fish do not interbreed with wild fish and dilute their genetic makeup (PDF 47 kB).

Alaska sport fish hatcheries release over one million rainbow trout annually to enhance inland sport fisheries. One way to ensure these fish do not establish new populations or hybridize with wild fish is to produce sterile triploid fish that are also all females. Triploid fish have three sets of chromosomes instead of two sets. 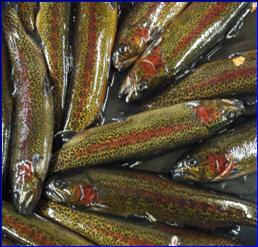 Female fry, which have an XX chromosome complement, are changed into morphological males by feeding them male hormones. We refer to these sex-reversed fish as XX males. Even though these fish are genetically female they produce sperm instead of eggs. These sperm contain only X chromosomes and no Y chromosomes (the "male” chromosome”). When sperm from an XX male is used to fertilize eggs, the offspring are all female. After they are sacrificed for their sperm, these fish are discarded – they are never stocked. 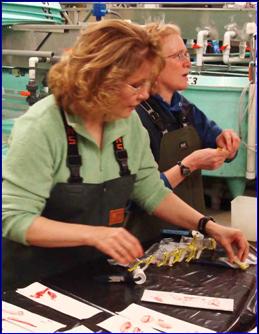 Here the testes from XX males are being crushed to
release sperm so they can fertilize the eggs. 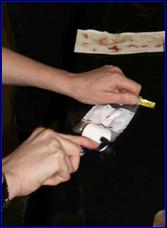 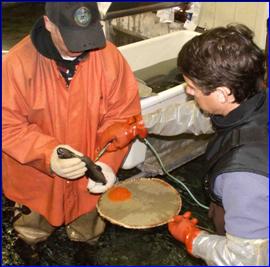 Eggs are gently squeezed from a female rainbow trout. These eggs each contain two sets of chromosomes, at this time. 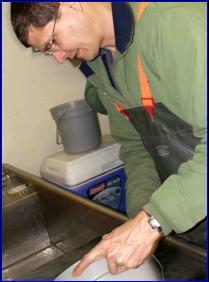 The eggs are fertilized with the sperm collected earlier. After a brief moment, the eggs are then gently rinsed to remove excess sperm and bacteria. 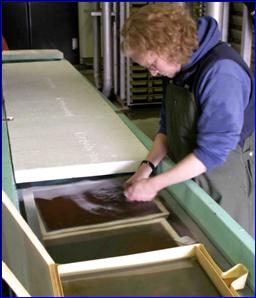 Exactly twenty minutes after fertilization, eggs are placed in a warm water bath maintained at 26°C (79°F) for 20 minutes. This warming prevents the extrusion of the third set of chromosomes by disrupting a process called the "spindle fiber formation”. The resulting fish have three sets of chromosomes rather than two and are called "triploids”. Because these fish have only X sex chromosomes, they are all females. 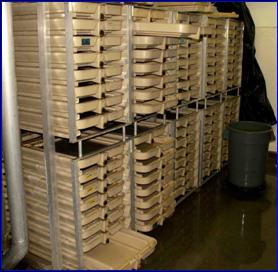 After a warm bath, the egg trays are placed in stacks for incubation. After several weeks the eggs develop into fry. 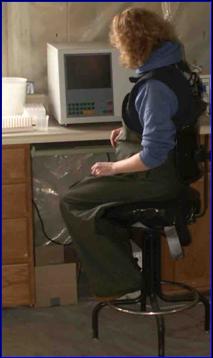 The groups of fish are certified for their levels of tripoidy before being released. 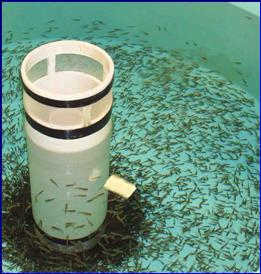 The fry are placed into rearing tanks, and grow into fingerlings, which are released into lakes and streams. Because the fish are mature sexually they will not interbreed with wild rainbow trout.

his "heat-shock" method of producing triploids can result in a low number of fish that are diploid (two sets of chromosomes). But by creating all-female fry, we ensure that these non-triploid fish will not establish new populations in places where wild rainbow trout are not present. 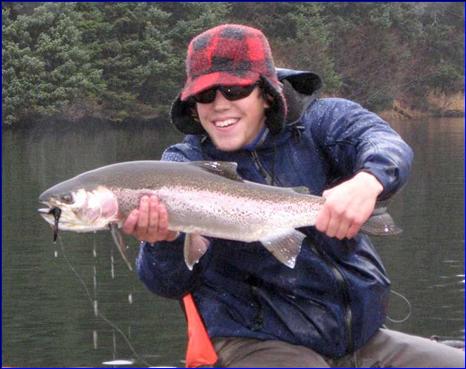 The smile on this angler’s face says it all. Triploid all female fish are good angling and good eating.

What is a triploid fish?