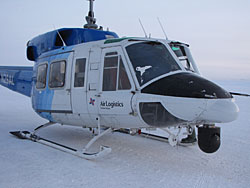 ADF&G and the USFWS-Marine Mammals Management are collaborating on a project to evaluate the feasibility of 3 methods to detect polar bear dens on barrier islands in the Beaufort Sea. Detecting a denning bear under several feet of packed snow is necessary so that winter industry activities can avoid disturbing the maternal females, which may affect newborn cub survival or cause the female to prematurely exit the den and endanger industry workers in the area.

Two of the methods use a type of Forward-Looking Infrared (FLIR) sensor that under suitable conditions can detect denning polar bears by the infrared radiation (heat) they give off in the den. FLIR surveys use state-of-the –art imagers mounted on a helicopter (Fig. 1) or a hand-held unit (Fig. 2) conveyed in a tracked over-snow vehicle.

The third method uses an age-old technique—a trained scent dog (Fig. 3). Weather, especially snow or fog in the air and surface winds that blow snow, is a major constraint on the success of the 2 FLIR methods. Unfortunately, this type of weather is common on the North Slope in winter. Dogs are less affected by weather but can become fatigued on long surveys. However, dogs have detected dens that the FLIR methods missed.

At the conclusion of the project the feasibility of each method will be better known, and industry and agencies will have better knowledge about how to apply the methods to minimize the number of maternal polar bear dens that could go undetected in the vicinity of industry activities.

For additional information about this project, contact Dick Shideler at (907) 459-7283 or dick.shideler@alaska.gov. For more photos and a video see the Polar Bear Den Detection Photos page. 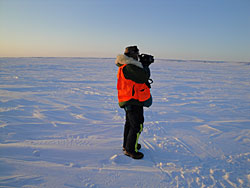 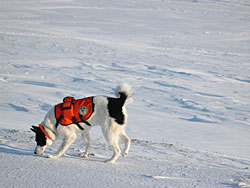