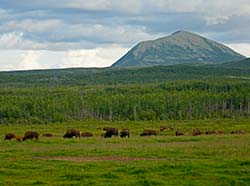 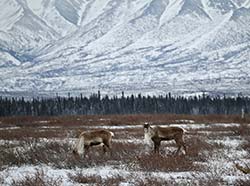 Donnelley Dome is a prominent landmark near the Richardson Highway about 20 miles south of Delta. Rising about 2,500 feet above the open countryside, it overlooks Donnelly Flats and the Delta River. This dome was formed as a glacier coming from the Alaska Range split in two, carving away sides of a former mountain. A military road, generally open to the public, accesses the dome, and trails climb to the summit.

Free-ranging bison may also be seen in the area during calving season, between late April and early June. That’s when they move a few dozen miles southwest to the gravel bars of the Delta River near Donnelly Dome, then summer along the river.

The area is in the range of the Macomb caribou herd, a small herd of mountain caribou that can sometimes be seen in the summer and fall. Rutting moose work this area in September and October. Grouse, ptarmigan and a variety of bird life abounds.

Grizzly bears and caribou may be observed south of Delta Junction on Donnelly Flats, part of the Fort Wainwright Military Reservation.