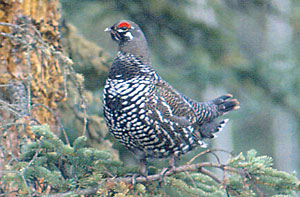 The male spruce grouse has a black throat and red comb over the eye and a rusty-orange band at the tip of the tail. The female lacks the red comb and the black throat. She is generally a mottled rusty brown to gray color with dark heavy barring on her whitish-colored belly.

The spruce grouse of Southeast Alaska lacks the rusty band on the tail, which characterizes other Alaskan spruce grouse, but has white-tipped feathers overlying the tail.

On the first warm April days that promise winter is abating, the male begins his courtship displays by pompously strutting on the ground or in a tree. Occasionally he flicks his raised tail, emitting a sharp rustling sound. In May he also begins to perform characteristic aerial displays, signifying that he “owns” the immediate acre or so of forest and that no other displaying cock is to trespass in this domain. The display begins with the bird strutting in a tree, followed by a steep downward flight. A few feet above the ground the bird checks his flight and flutters to a landing. The fluttering wings create a soft sound and this, as well as other sounds made by wing or tail movements while strutting on the ground, attracts the hen to the cock’s territory.

In May, four to nine eggs are laid in a shallow nest located at the base of a spruce tree or beneath a log. Hatching occurs in mid-June, about the same time the cock stops displaying. The cock neither participates in incubating the eggs, nor assists in rearing the chicks, but often joins the hen and brood in late August. By early September it is not unusual to see an adult male with large flocks composed of several hens and broods. These family flocks disband by October and smaller groups settle on wintering areas, often in dense stands of spruce.

In winter, spruce grouse spend most of the daylight hours in spruce trees loafing or feeding on needles. At night the birds roost either in a spruce tree, on the snow near its trunk, or sometimes in a “snow-roost” beneath the snow surface. 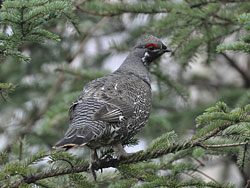 As snow melts in spring, the birds spend more time on the ground, and supplement their spruce needle diet with highbush cranberries that persisted through the winter. Principal summer and fall foods include highbush and lowbush cranberries, blueberries, crowberries, green leaves, fungi, and assorted flowers and seeds.

Chicks eat a lot of insects in the first few weeks after hatching. Broods seem to like areas with a dense ground cover of blueberry, perhaps because the plants are tall enough to hide the chicks but low enough to let the hen watch for predators. Spruce grouse need a large amount of grit (small stones or pebbles used to grind food in the birds gizzard) to make the change from a fall diet of berries and leaves to a winter diet of fibrous needles. During September and October, adults and young pick up grit in early morning along roads, streams, and lakes. Some of the birds travel several miles to get grit. These autumn movements are the longest in the bird’s whole life, as spruce grouse stay in the same few acres of ground the rest of the year.

No one knows yet why there are a lot of grouse in an area one year, and very few the next year or two. These ups and downs occur among grouse even in places far from roads and towns. There doesn’t seem to be much to worry about concerning the periodic crashes of grouse populations; long experience has shown that the birds will soon be abundant again if their habitat remains unchanged. The birds are in real trouble, however, if nesting cover, broodrearing areas, feeding places, or roosting sites are lost because of changes wrought by man or nature. Recently, spruce bark beetles have killed the majority of mature white spruce trees in much of Southcentral Alaska. Wildfires have been the most important cause of loss of spruce grouse habitat in Interior Alaska. However, these same fires may increase habitat for ruffed grouse and sharp-tailed grouse.

In the fall, spruce grouse are often seen along roadsides throughout their Alaskan range. Favorite places for hunters and bird-watchers are on the Parks Highway from Trapper Creek through Denali State Park and from Nenana to Ester, on the Steese Highway between miles 120 and 148, along the Elliot Highway, along white spruce-dominated sections of the Alaska and Taylor Highways, near Glennallen on the Glenn Highway, on many secondary roads on the Kenai Peninsula, and in the Matanuska and Susitna valleys.

Range of the Spruce Grouse in Alaska

Nearly every good-sized patch of boreal forest in North America has its population of spruce grouse.

The shaded portion of the map indicates areas Spruce Grouse are found in Alaska.