Rock ptarmigan breed on hilly or mountainous tundra throughout Alaska. They prefer slopes and high valleys where shin-high shrubs form a patchy pattern with low herbs and grasses. The summer range of rock ptarmigan often abuts willow ptarmigan range, with rock ptarmigan breeding on higher, drier, rockier ground. In winter most male rock ptarmigan are at the lower edge of their breeding range. The hens move to the hills fringing large valleys, where they spend the winter in shrubby, open habitat. 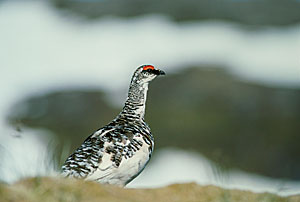 Larger than whitetails and smaller than willows, rock ptarmigan develop their winter plumage early in October in central and northern Alaska, and are still predominantly white until early May. Cocks have a black mask from bill to ear in winter, effectively contrasting with their bright red, fleshy eyebrow and white body plumage. Most hens have no mask, but about one female in five has a partial black stripe fore and aft of the eye. As is the case in willow ptarmigan, both sexes have black tail feathers tipped with white. However, the rock ptarmigan’s much narrower bill clearly distinguishes it from the willow ptarmigan.

By early May, female rock ptarmigan begin to show their new, brown summer feathers on the crown and neck. When the hens begin incubating their clutch early in June, they are almost completely brown except for their white wings. Males keep the winter plumage until early June, then molt quickly to the finely-barred, dark brown summer plumage. However, the subspecies of rock ptarmigan found in the Aleutian Islands are an exception. There, the males actually begin getting brown feathers (almost black feathers in the near islands) in late March before the female plumage change.

Nests of rock ptarmigan consist of a scratched-out depression that may be lined with moss, lichen, grass, and the female’s breast feathers. They are usually located under low shrubs, although some hens nest where there is no vegetation sheltering them. Eggs are laid at intervals of 24 to 30 hours with full clutches usually containing six to eleven eggs; the number in a clutch varies not only with the individual but from year to year as well. Incubation lasts from 20 to 22 days. Nests are used only once. Re-nesting (second attempts to nest made when the first nest is destroyed) seems to be rare among Alaska ptarmigan.

Chicks hatch late in June in most of the state. In warm weather the hen leads the chicks from the nest about 12 hours after they hatch. The young live off nutrients stored in their bodies for a day or two after hatching, while learning to peck at bits of food shown to them by their mothers. The phenomenal growth and development of young ptarmigan during the first month of life is proof that the chicks learn the lessons of food-gathering very well. They double or triple their weight in ten days, and develop a working set of flight feathers during that time.

Hens erratically lead their broods from one good location to another, usually staying within one-half mile of the nest. Chicks normally stay with their parent until late August, but in crowded brood-rearing areas some exchanges of chicks may take place. Throughout September flocks of rock ptarmigan numbering from 20 to over 250 birds gather and move from place to place. At the end of this period, in which various local populations mix, flocks of mostly females move to their low-elevation wintering areas. 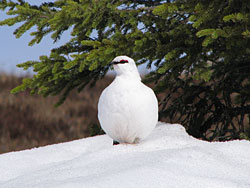 Winter flocks appear to be nomadic, wandering from place to place according to weather, snow conditions, food supply, and perhaps other impulses. Eating, avoiding predators, and waiting out storms are daily winter activities. Feeding takes up most of the daylight hours because rock ptarmigan must eat the equivalent in food of one-tenth to one-fifth of their body weight each day.

Rock ptarmigan can be seen in the same areas along the road system as willow ptarmigan, but are more common at higher elevations. Steep slopes above treeline along the Denali Highway and through Isabel and Thompson passes along the Richardson Highway support good populations of rock ptarmigan. Twelvemile and Eagle Summits on the Steese Highway, and Mount Fairplay on the Taylor Highway also are places where hunters, bird watchers, and photographers can expect to find rock ptarmigan.

Range of the Rock Ptarmigan in Alaska

Rock ptarmigan are found in nearly all treeless areas of Alaska except wet, coastal tundra. Recognizable differences in color and size have developed in places where ptarmigan live in isolated island situations. The classic example is on Alaska’s Aleutian Island chain, where seven subspecies of rock ptarmigan have been described; however, ongoing morphological and molecular research indicate that there are more likely only four subspecies.

The shaded portion of the map indicates areas Rock Ptarmigan are found in Alaska.