The City of Homer is located at the end of the Sterling Highway on the southern end of the Kenai Peninsula. The Homer fishing lagoon, or "The Fishing Hole" is located on the Homer Spit, which is a peninsula projecting 4 ½ miles out into Kachemak Bay. This bay is one of the most productive marine areas in the world and provides world-class halibut and salmon fishing opportunities. "The Fishing Hole" began as a man-made lagoon built next to the Homer Small Boat Harbor for use as a barge refitting location. In 1984, the Division of Sport Fish began stocking king salmon smolt in the unused lagoon in an effort to establish an easily accessible, bank-fishing "terminal" recreational fishery. A coho salmon smolt-stocking program was begun in the late 1980's to further enhance sport fishing opportunity. Stocking of both king and coho salmon has continued on an annual basis. Due to the success of stocking efforts and the popularity of site, the City enlarged the lagoon to twice its former size in 1994. 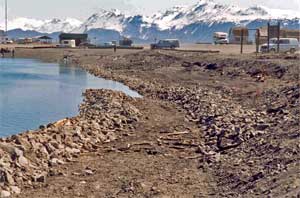 East side of trail - before 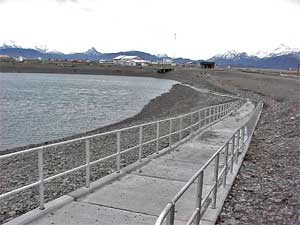 East side of trail - after 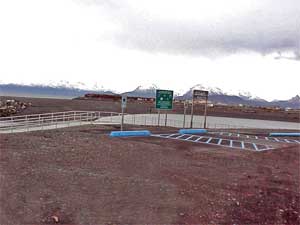 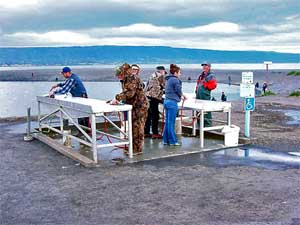 The objective of this project was to construct wheelchair access ramps that met current Americans with Disabilities Act (ADA) standards and were designed to allow access to the fishery in "The Fishing Hole" at any tide stage, provide paved handicapped parking, and easier access to the ADA accessible toilet facilities located near the lagoon. The seaward banks of the lagoon were also hardened to reduce maintenance costs and to provide protection from winter storms for the upgrades inside the lagoon.

The project was completed in 1999. Funding for construction of the project was provided by grants from the Federal Aid in Sport Fish Restoration Program, as well as the Alaska Department of Transportation & Public Facilities, and Department of Natural Resources, Division of Parks and Outdoor Recreation. Maintenance of the improvements constructed inside the lagoon as well as maintenance of the outer bank-hardening portion of this project is provided by the City of Homer. Prior to "The Fishing Hole Improvements Project", easy access to the stocked fisheries only applied to able-bodied sport anglers. Construction of paved handicapped parking and a trail to the accessible restroom, and installing a series of ADA ramps and landings inside the fishing lagoon, allows anglers with a mobility impairment the opportunity to partake in an award winning recreational fishery which was unavailable to them until this project. Hardening the outer banks of the fishing lagoon has helped to reduce maintenance costs to the City of Homer and has helped to preserve the integrity of the site from damage by wave action and winter storms.