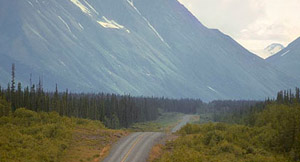 The Yukon River is the largest river in Alaska and its drainage is the fifth largest in North America. The Yukon Management Area includes all of the Yukon River drainage in the United States except for the Tanana River drainage. The area as a whole is sparsely populated; only about 12,000 people live along the Yukon River and its tributaries (excluding the Tanana River). The communities within the area are invariably located near water, because of the importance of fish and/or marine mammals as a food source to native people historically and today.

Land ownership and jurisdictions fragment this large area into a complex mosaic. The federal government is the major land manager through its jurisdiction over lands in two National Parks and Preserves (Yukon–Charley National Park and Preserve and Gates of the Arctic National Park), five National Wildlife Refuges (Yukon Flats NWR, Kanuti NWR, Koyukuk NWR, Nowitna NWR, and Innoko NWR), the White Mountains National Recreation Area, the Steese National Conservation Area, and numerous Wild and/or Scenic Rivers, as well as other classifications of federal lands. The remaining lands are held by the State of Alaska, Native corporations, and other private landowners.