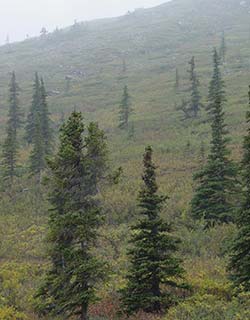 Smoke from distant wildfires settles on the Steese summit. 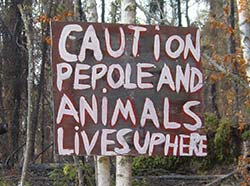 The Steese Highway (Alaska Route 6) is a prime Fairbanks-area road for wildlife viewing. The highway passes through a variety of habitats, from the river bottom forest land of the Chatanika River to the higher-elevation alpine-tundra around Twelvemile and Eagle summits. The Steese also offers a tour through the process of regeneration and succession that follows fire in the boreal forest.

Portions of the 175-mile Steese Highway corridor can be explored in less than a day, but allow a full day if you plan to travel as far as Twelvemile Summit and back to Fairbanks, with stops along the way. Seven campgrounds between 39 mile and the end of the road help facilitate multi-day trips, and services and amenities are available at several roadhouses and in Circle and Central.

Mile 1–Mile 30: Just a few miles north of Fox, dredge mining tailing ponds offer habitat for waterfowl, muskrat and beaver. A beaver pond amid the tailings at Mile 16 serves as a magnet for waterfowl in the spring, and it's possible to spot more than a dozen species at one sitting.

The Steese climbs from the relatively low elevation of 450 feet above sea level at Fairbanks to 2,233 feet at Cleary Summit, about 20 miles out of town. There are several pullouts and overlooks on the way up to the summit. Over the next six miles, it drops almost 1,500 feet as it follows Cleary Creek down to the Chatanika River. The Chatanika then parallels the Steese for about 30 miles.

A series of tailing ponds and gravel quarries along Cleary Creek and the Chatanika draw moose and considerable numbers of migrating waterfowl. Fish can be found in many of these ponds, stocked rainbows as well as whitefish and grayling. The Chatanika is home to Arctic grayling, three species of whitefish, least cisco, northern pike, burbot, longnose suckers, slimy sculpins, lake chubs, Alaska blackfish, Arctic lamprey and sheefish (inconnu). The river also supports a summer run of chinook salmon. Bears, wolves and scavenging birds are drawn to the river in late summer to feed on the fish.

Mile 30–Mile 57: Mile From about mile 30 and beyond, evidence of the 2004 Boundary Fire is abundant, and the edges between burned and unburned areas are likely places to see wildlife. Exercise caution if you venture into areas that have burned. Standing dead trees may be unstable, especially the first few years after a fire. The charcoal and charred wood is also very messy.

The early succession vegetation that thrives after a fire is a magnet for small mammals, which in turn attract predators like fox, marten, ermine and mink. Grasses are quick to emerge, and their seeds feed mice and voles. Willow, birch and aspen shoots draw snowshoe hares, which are eaten by lynx, coyotes, owls and other raptors. Woodpeckers and grouse are quick to colonize recently burned areas.

Yellow-cheeked voles thrive after a burn. As early succession plants become established, these whistling, colonial rodents (they are hamster-sized - the largest vole in North America) draw hawk owls, marten, foxes and weasels to the area.

Black bears and grizzly bears are omnivores, and fires generally increase the availability of plant and animal foods for bears. In upland areas, blueberries, cranberries and soapberries often thrive following fire, and fire rejuvenates the variety of grasses and forbs consumed by bears in spring and summer. Early stages of plant succession tend to increase moose production and more calves are available as prey. During the early weeks of calving in the springtime, moose calves are important prey for bears.

Unburned areas of mature black spruce forest are home to red squirrels and spruce grouse, but mature spruce forest does not support the diversity of wildlife found in early stage succession forests. The key is patchwork - many animals benefit from the combination of mature trees, open areas and newly regenerating stages.

There is a picnic area at mile 57. The Bureau of Land Management (BLM) maintains Cripple Creek campground at mile 60. A short nature trail to the river provides an opportunity to hear Swainson's and varied thrush, Northern waterthrush and yellow and yellow-rumped warblers. Otter and mink may be seen along the creek here. Keep an eye out for tracks and other signs of their activity. Porcupines can also be found in this area.

Mile 57–Mile 128: The road climbs out of the Chatanika River valley, following McManus Creek, and hits Twelvemile Summit (3,190 feet) at mile 85.5. This offers a glimpse of the extensive alpine habitat that exists on the ridges of the Interior. Eagle Summit (3,685 feet), the highest point on the Steese and one of the highest roadway mountain passes in Alaska, is 20 miles farther down the road at mile 107. The 24-mile Pinnell Mountain Trail offers an alpine tundra hike between Twelvemile Summit and Eagle Summit. Be prepared for possible thunderstorms, rain, snow, sleet, fog or cold, high winds at any time of year on this trail.

Caribou from the Fortymile herd may be seen from the highway, and Twelvemile and Eagle Summit are good places to stop and scan the countryside. The shrill whistle of hoary marmot is a common sound in the area. Ptarmigan, surfbird, long-tailed jaeger, northern wheatear and raptors such as merlin, gyrfalcon and golden eagles may be seen in the alpine areas around the summits, and especially along the trail. Wolves and foxes are sometimes seen, and pika may also be seen and heard in this area.

From Eagle Summit, the road drops in elevation. Caribou may also be seen near Mammoth Creek at mile 116 in late winter and early spring. The creek is named for the many fossils that have been found in the area.

The junction to Circle Hot Springs is at mile 128. The last 35 miles of the Steese, from Central to Circle, runs mostly through lowland forests of spruce and birch. Stands of taller white spruce rise above the black spruce.

Floating the Chatanika River: Floating the river is an excellent way to see wildlife if you are quiet. The Chatanika flows between the Steese and the Elliot Highways, and the 20-mile float trip between the two roads is popular. The Chatanika parallels the Steese for about 30 miles, with the uppermost access point at mile 66. There are a number of places along the route to reach the river. At mile 39, the Upper Chatanika River State Site offers camping, picnicking and river access. This is a good put-in for downriver floats, and serves as the take-out for another popular float trip, beginning at mile 66. Water in all Interior rivers can be very low during middle and late summer so check conditions before embarking on a float trip.

Check with the agencies listed under Other Resources for updated information about accessible facilities along the road.

The 162-mile Steese Highway begins on the east side of Fairbanks and heads north. The first 81 miles of the Steese Highway is paved, the rest is gravel. About 10 miles north of Fairbanks at Fox, the highway branches - the Steese heads northeast and the Elliot Highway heads northwest. The Elliot receives considerable commercial use - it connects with the Dalton Highway and carries truck traffic north to Prudhoe Bay. The Steese ends near the Yukon River at Circle, and receives less traffic and offers good wildlife viewing opportunities.

The road is well maintained in summer but you may encounter tight corners, soft road shoulders and dusty or slippery conditions. In winter the highway is periodically closed, sometimes for days at a time, due to weather. Be prepared for adverse road conditions in winter.

For updated road conditions, check with the AK Department of Transportation: