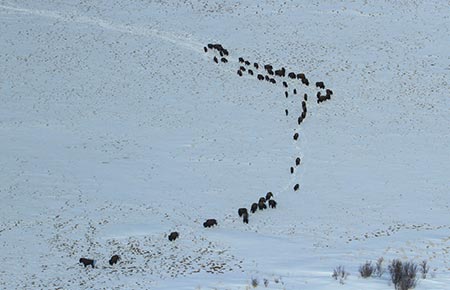 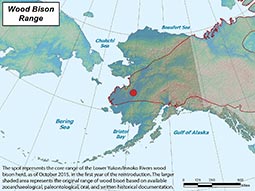 Wood bison calves can stand when they are only 30 minutes old and can run within hours of their birth.

Wood bison are the larger of the two subspecies of modern American bison. Adult males are approximately 6 feet tall at the shoulder, 10 feet long, and weigh more than 2,000 pounds. The females are smaller, generally weighing around 1,200 pounds. The wood bison has curving horns that point upward and hair on the chin that resembles a beard. Their head and shoulders are large compared to their hindquarters, with a pronounced hump ahead of the front legs. The wood bison's hump rises almost straight up from the neck, and then slopes downward to the hips. The bone structure of this giant, forward hump has evolved in the wood bison to support a massive muscle structure that helps them sweep their head through deep northern snows to access grasses and sedges in winter. They have a dense coat of soft, durable hair that is not hollow like moose caribou and sheep, but is more like human hair. The hair color ranges from dark brown to black along the legs and lower body, to light brown along the hump. Wood bison begin to lose their winter coat as temperatures warm in the early spring. By mid-summer the coat is completely shed and has been replaced with new hair.

Female wood bison are sexually mature around 2 years old and can have their first calf when they are 3. They generally have a single calf, twice in every three years. Wood bison are pregnant for nine months and can give birth from April to August, with most calves born in May. Newborn calves are reddish in color, similar to moose calves. In order to evade predators, calves can stand within 30 minutes of birth and can run and kick within hours. After a week, calves will begin grazing but will continue to nurse for several months. After 10 weeks, their coats begin to darken to a deep brown by about 15 weeks of age.

Wood bison are primarily grazers, mainly eating grasses, sedges, and forbs. They can also use a variety of other plants; for example, silverberry and willow leaves make up part of their summer diet. Wood bison graze in meadows, around lakes and rivers, and in recent burns.

Wood bison have strong social bonds and like to be near other bison. Cows and young bison live in groups of up 20 to 60 animals during most of the year. Adult bulls usually live in smaller groups and stay separate from the larger groups of cows and young bison except in late summer, during the breeding season.

Wood bison generally move between seasonal ranges within a home range. The size of the year-round range tends to increase with population size, and also depends on habitat quality. In lower quality habitats they will move over a larger home range. Wood bison move each day from meadow to meadow, where they graze and rest before moving on. Although bison move slowly when feeding, they are capable of moving rapidly over long distances.

Wood bison once ranged across northwestern Canada and were also found in a large portion of Interior and Southcentral Alaska. Alaska's population was extirpated by the early 1900s, although several small herds persisted in Canada.

In 2015, 130 wood bison were released to the wild along the Innoko River near the community of Shageluk in Southwest Alaska. About 16 wild-born calves were recruited into the population in the summer of 2015. As of October 2015, the core range of these wood bison, known as the Lower Yukon/Innoko Rivers Herd, was within 30 miles of Shageluk, except for two lone bison that have explored habitats along the Yukon River from Russian Mission to Galena.

In 2015, 130 wood bison were released to the wild along the Innoko River near the community of Shageluk. As of October 2015, Alaska's wild wood bison population numbered between 120 and 130 animals. Over the course of the first six months in the wild, there were some births and deaths. Biologists think 400 to 500 animals is a good minimum number for long-term genetic diversity for the Lower Yukon/Innoko Rivers Herd. Over time, the surrounding habitat could potentially accommodate as many as 1,000 to 5,000 wood bison.

As of October 2015, there were 16 wood bison in captivity at the Alaska Wildlife Conservation Center. These animals are expected to remain at the Center for educational purposes.

See the Wood Bison Restoration in Alaska page for more on the status of the Lower Yukon/Innoko Rivers Herd.

The original source of the wood bison reintroduced in Alaska was a disease-free herd in Canada. Currently, habitat in Canada supports about 4,700 wood bison in six healthy, free-ranging herds. A similar number of wood bison occur in herds that are infected with cattle diseases in the area of Canada's Wood Buffalo National Park (WBNP). There are also herds of domesticated wood bison in Canada. In the United States, the wood bison is listed as threatened under the Endangered Species Act (ESA). To learn more, visit the ADF&G Special Status page for wood bison.

Wood bison were the last bison to occur naturally in Alaska but disappeared during the last few hundred years, presumably because of unregulated hunting and changes in habitat distribution. By 1900, there were fewer than 300 individuals remaining in Canada, and by 1950, it was thought that wood bison no longer existed as a subspecies. In the mid 1950's, however, a small herd of wood bison was discovered in a remote area of Canada. In subsequent years, many wood bison were captured and moved to Canada's Elk Island National Park, where they have been kept free of disease and propagated to serve as source animals for disease-free wood bison herds throughout their former range and in Siberia. Canada has invested considerable effort into the conservation and management of wood bison. As of May 2013, there were approximately 11,000 wood bison in Canada, including nearly 5,000 in seven free-ranging disease-free herds; 6,000 in five free-ranging but diseased herds; and 300 in the Elk Island park captive population that is maintained to provide stock for conservation efforts.

The Alaska wood bison management plan calls for growth of the Lower Yukon/Innoko Rivers Herd. Population models suggest that the 130 animals reintroduced to the wild in 2015 could grow to about 250 by 2021 and to 500 by about 2030, based on growth observed in populations reintroduced to Canada in recent decades. Biologists are closely monitoring how the newly reintroduced bison are responding to their new habitat.

Loss of habitat is the main threat to most wildlife. Alaska has thousands of square miles of unoccupied, good-quality habitat that is ready to accommodate wood bison. Disease is an issue in Canada, but the cattle diseases that some bison have there have never been detected in Alaska. Predation could someday be an issue, but for all of the reintroduced wood bison populations in Canada, and the plains bison populations in Alaska, it took predators decades to figure out how to kill them effectively. Predators still have little effect on disease-free bison populations, unlike the effect they can have on moose, for example.

Wood bison can provide a variety of benefits to people including high quality meat, warm and durable hides, and support for wildlife viewing, tourism and guiding.

Native Alaskans once hunted wood bison for their meat and hides, and some herds in Canada continue to support regulated harvests. 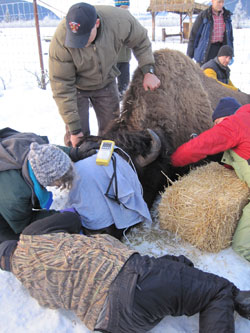 Alaska Department of Fish and Game biologists are monitoring the newly reintroduced wood bison. The management plan suggests that hunting may occur when there is a harvestable surplus of about 20 animals, with the overall population at about 250 animals at that time.

A wide range of interest groups collaborated to create the Wood Bison Management Plan. The seven goals of the plan are:

Other Key Points include:

Biologists are monitoring the newly introduced population, and the introduction process itself is an experiment. A number of bison were released with radiocollars and equipped with GPS devices, enabling biologists to track their movements. This provides insights into their core range areas, how they explore new habitat, how some individuals travel exceptional distances relative to most wood bison, and how they respond to their new habitat.

There will be future opportunities for you to be involved in wood bison conservation, including during proposed regulatory actions under the ESA and site-specific cooperative planning efforts for each restoration location.