By Madison Bargas and Riley Woodford 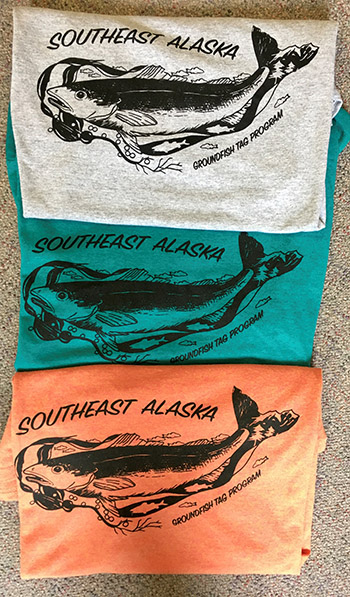 Each year the Alaska Department of Fish and Game rewards all persons who return an ADF&G sablefish tag with a tag reward, a hat or t-shirt. Additionally, each tag returned to the department with complete recovery information (fisherman’s name, date of recovery, and latitude and longitude) is entered into a random drawing for a cash prize. Multiple tags can result in multiple wins, as this year’s results show. A total of 1,183 tags qualified for this year’s drawing.

The following people were randomly selected from the list of qualified tags as the winners of the 2021 annual sablefish tag recovery incentive drawing:

William Hammer of the F/V Silver Lady out of Port Townsend, WA won both the $1,000 first place and the $500 second place prize.

The fourth through seventh place winners all took home $250 each. They are 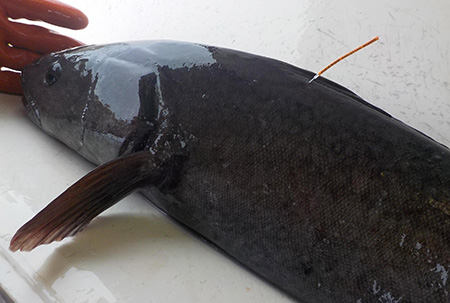 A sablefish with a tag near its dorsal fin. Sablefish (also known as black cod) in Southeast Alaska waters have been marked on the left side of their dorsal fin with a uniquely numbered tag. In the past some tagged fish have been caught years later more than 1,000 miles away. Photo by Andrew Olson/ADF&G

Ocean Mayo of the F/V Coral Lee out os Sitka, Alan Fisher of the F/V Silvertip out of Juneau, Ronald Thorneycroft of the F/V Wind Walker out of Bellingham, and John Bahrt of the F/V Kristina out of Sitka.

The department has been tagging sablefish in Southeast Alaska since 1979 to obtain information on sablefish movement, growth, and abundance. Tags are bright orange or green in color, approximately three inches long, and located below the first dorsal fin. In a typical year 6,000 to 8,000 sablefish are caught, tagged, and released back into Southeast waters by biologists in surveys during May and June. 2018 was a record year and almost 10,000 sablefish were tagged that spring. The sablefish are caught using pots strung on a longline. Pots are ideal for catch-and-release fishing. Unlike hooks on a longline, which can injure a fish’s mouth, fish caught in pots have less chance of being injured. 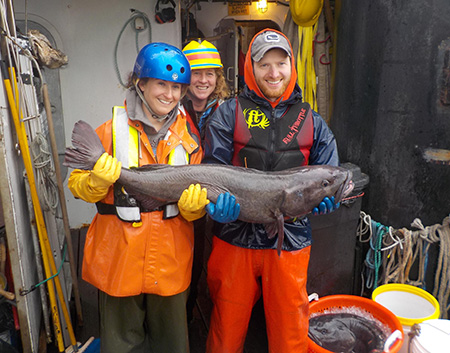 Groundfish-Shellfish Coordinator Andrew Olson, right, with former groundfish biometrician Jane Sullivan (left) and Medeia crewmember Becky Wilson with a big black cod. The orange tag is visible in the dorsal fin near the center of the image. The fish was released alive. Photo by Aaron Baldwin/ADF&G

Sablefish tagged in the internal waters of Southeast Alaska have been recovered from as far away as Northern California 2,066 km (almost 1,300 miles) and the Pribilof Islands in the Bering Sea. One sablefish was caught five years after it was tagged. Sablefish are long-lived, and can reproduce for decades once mature. Sablefish are known to live into their 90s. Fish and Game aged a 97-year old sablefish caught in Prince William Sound.

Movement information collected from tagging studies is important to the management of sablefish fisheries, and the department appreciates the participation of fishermen and processors in this program. Information detailing the release and recovery of tag returns may be requested from ADF&G staff.

A closeup of the tag, which is about three inches long, and located below the first dorsal fin.

A 2018 Fish and Wildlife News article about the tagging program: A record number of tagged sablefish, Alaska Department of Fish and Game

Madison Bargas is a good contact for information: Madison.bargas@alaska.gov 907-465-6135.