The Threatened, Endangered, and Diversity Program
Conducting Research so No Species is Left Behind 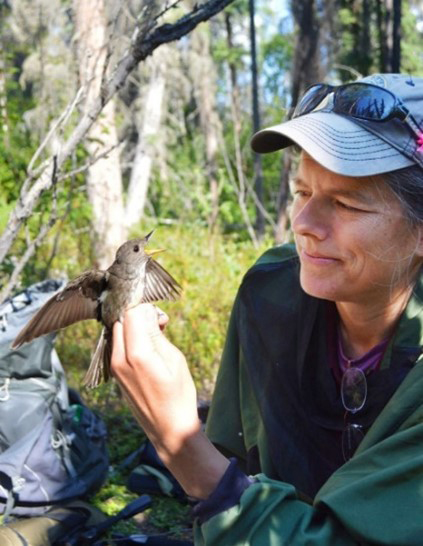 A summer day in an Interior Alaska wetland can be an insect-filled and overheated experience. The buzzing of flies and mosquitos is only occasionally broken by the loud, distinctive three-note call of a little gray bird, the Olive-sided Flycatcher. Despite being tough enough to migrate all the way to South America for the winter, research shows this species has declined by 78% in the last few decades. Little was known about the flycatcher’s migration, survival, or nesting success in Alaska, and thus there was no clear path to its conservation.

Although Alaska encompasses a vast and relatively pristine wilderness, many species here share similar stories to the Olive-sided Flycatcher. Migratory birds in particular are declining as modern threats stack against them and basic ecological information vital for their protection can take years to compile. Small mammals are also susceptible to these knowledge gaps, particularly lesser known, rare, or hard-to-study species such as Alaska hares, little brown bats, and northern bog lemmings. Though not generally hunted, species of small birds and mammals can be imperative for functioning ecosystems and indirectly support the survival of many species that Alaskans rely upon for subsistence, economic support, and cultural significance. 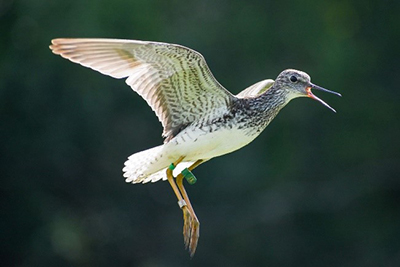 Luckily for the Olive-sided Flycatcher, there is a small team of biologists that regularly tramp through their buggy habitat to study them. Dedicated and thorough, this team is part of one of the Alaska Department of Fish and Game’s lesser known but influential programs, the Threatened, Endangered, and Diversity Program, or TED.

The TED program was created in 2015 from a merger of the Wildlife Diversity Program and the Endangered Species Program. Its mission is to “conserve wildlife species to avoid the need for listing under the federal Endangered Species Act (ESA), to recover species already imperiled, and to keep common species common.” The TED program realizes this goal through the research, monitoring, and management of species of special concern: those with small or declining populations of ecological or cultural importance, those subject to some threat to their survival, and species whose ecology in Alaska is not well understood. Federal funds, provided through the State Wildlife Grant (SWG) Program, are utilized to help TED focus on these species in a proactive fashion, identifying and reversing declines before their recovery becomes too expensive and difficult. With staff located in Fairbanks, Anchorage, and Juneau, the TED program comprises ten wildlife biologists and endangered species specialists involved in over twenty projects to ensure that no species is left behind.

Out in the Field 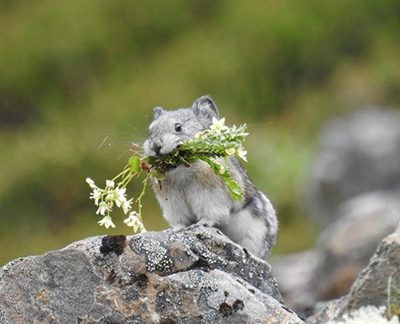 Fairbanks biologist Julie Hagelin has been following Olive-sided Flycatchers in the wetlands of Interior Alaska for over five years. Where previously little was known about Alaska populations, now Hagelin has documented the first ever migratory route for the species as well as important stopovers where birds refuel during migration. She is working to fill knowledge gaps regarding its survival, breeding success, and diet. In a similar habitat, Hagelin is also researching the population, range, and diet of the little-known northern bog lemming.

Other Fairbanks TED team members include Chris Barger and Travis Booms, who are known for working on species that few people have ever tried to study in Alaska, usually because they are painfully elusive and difficult to work on. Winters are spent in snow covered blinds out on the tundra, patiently waiting entire days and nights to locate Alaska hares, found in western Alaska and four times the size of the more familiar snowshoe hare. Summers are then spent in pursuit of the Gray-headed Chickadee, one of the rarest land birds in North America. When not sleuthing for rare species, Barger and Booms are putting GPS transmitters on migrating raptors such as the Golden Eagle. These tracking efforts have revealed that Alaska hosts one of the largest breeding populations in the country. 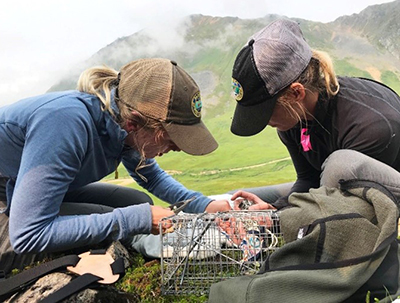 The pika team at work.

Further south, Anchorage biologist Katie Christie spends her time investigating collared pikas and boreal shorebirds. Her pika work takes her to rocky scree slopes of Southcentral and Interior Alaska where she captures and tags pikas and collects samples from their winter food caches. This research could yield new insights into their diet, survival, and potential resilience to climate change. In the boggy wetlands of Southcentral Alaska, Christie is also filling knowledge gaps for the Lesser Yellowlegs, a shorebird whose numbers have declined 88% in Alaska and 63% across their breeding range in the past 40 years. Christie’s research provides valuable new insights about this species’ migration patterns and suggests new possibilities for how they can be protected in the future. 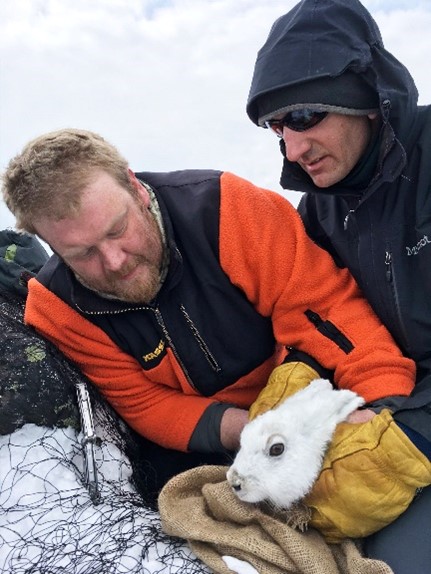 The last branch of the TED program is stationed in Juneau. Here, TED biologists Karen Blejwas and Tory Rhoades, with the help of citizen scientists, manage research and long-term bat monitoring projects for Southeast Alaska. The little brown bat is the most common and widespread bat in the state, but the species has been severely impacted in the eastern part of its range by white-nose syndrome, a deadly fungal disease that attacks hibernating bats. Finding the hibernacula, or hibernation sites, of wintering bats can be a crucial step in early detection for white-nose syndrome. To this end, Blejwas has used radio tagging to track bats to hibernation sites on forested scree slopes, one of the first studies to find bats hibernating in this habitat. Building on these tagging efforts, Rhoades is also developing a new method that relies on trained scent detection dogs to find more hibernacula.

Alaska’s combination of wilderness, resource exploration and extraction, and development means TED program biologists are called to fill widespread leadership and consultation positions throughout the state. Despite the small team, TED members can be found offering their voices and expertise to the Alaska Raptor Group, Boreal Partners in Flight, the Alaska Shorebird Group, The Pacific Flyway Council, the Cook Inlet Beluga Whale Task Force Habitat and Threats Mitigation Committee, and the Alaska Songbird Institute, among others. Additionally, the TED program regularly provides guidance to other State Divisions such as Commercial Fisheries, the Department of Agriculture, and the Department of Natural Resources, including the Division of Forestry. 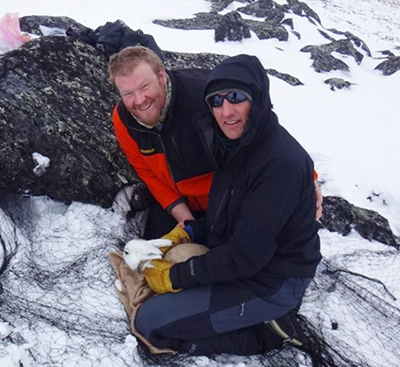 The endangered species team, Moira Ingle and Jenell Larsen Temple, also work with other State of Alaska departments as well as the Association of Fish and Wildlife Agencies (AFWA) and other national organizations to conduct research and provide consultation in the review and listing of threatened and endangered species under the ESA. By coordinating with all these programs, TED helps to ensure that Alaska’s fish and wildlife are managed and conserved with the best available science, allowing the continuation of subsistence, general harvest, and development opportunities.

Olive-sided Flycatchers and Lesser Yellowlegs are two species that have been found migrating as far as South America, but Alaska’s birds have been recorded migrating to all seven continents and what happens to them here can reverberate across the globe. Alaska provides breeding habitat for 20% of all waterfowl and 90% of all seabirds in the US, and 50% of all shorebirds in North America. The state also supports almost the entire continental breeding population of numerous bird species, such as King Eiders, Black Scoters, and Greater White-fronted Geese. In addition, Alaska is home to several rare small mammals, one of the northern-most known populations of bats in the world, and the northernmost frog in North America, the wood frog, who survives subarctic winters by literally freezing solid. 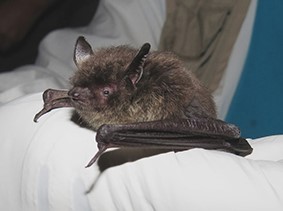 The TED program is a critical part of protecting this incredible biodiversity. Effective and meaningful management decisions cannot be made for animals for which little is known about basic ecology or population estimates.

“We’re not just research biologists” says program coordinator Tracey Gotthardt, “we’re stewards…. we help fulfill the State’s trust resource responsibilities for all of Alaska’s wildlife by leading efforts to ensure species persistence while ensuring continued, sustainable use of wildlife and development opportunities.” In short, the TED program works to maintain Alaska’s remarkable wildlife by protecting what we already have and working to bring back what we have lost.

How can you help the TED program? 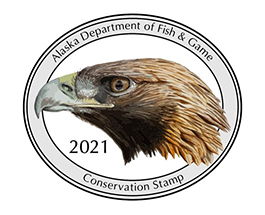 To support the TED program’s research projects, you can purchase a 2021 Conservation stamp! The stamp features the Golden Eagle and is illustrated by ornithologist and artist Bryce W. Robinson. Proceeds from these stamps will support ADF&G’s efforts to understand and conserve a broad array of Alaska’s species and habitats as well as public outreach and education.

More information on current research projects can also be found at the new TED website.