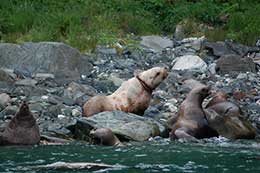 Sea lion H80 at Benjamin island with his neck entanglement shortly before the capture.

Capturing adult sea lions is risky business for biologists and the animals and it’s rarely done. In the past, most captures involved pups or juveniles, much smaller animals that can be reasonably managed. But for several reasons there is keen interest in developing a method to capture and release adult sea lions. Researchers have developed a new drug combination to chemically immobilize sea lions that’s proving quite promising. The capture of sea lion H80 on June 10, part of a pilot study using this new drug combination, was a success, although tinged with disappointment as well.

H80 is well-known to Alaska sea lion researchers. He was born in 2001 at Hazy Islands, a major sea lion rookery on the outer coast near the entrance to Chatham Strait south of Sitka. He was marked as a pup, enabling researchers to track him throughout his life. He has been resighted every year since, mostly in northern Southeast Alaska. In summer 2007, he was seen with a packing band or bands tight around his neck. He’s since been photographed in Lynn Canal, Icy Strait and Glacier Bay 20 times with the neck entanglement.

He’s not the only sea lion in Alaska with this problem. Garbage in the ocean – sometimes referred to as marine debris – creates problems for a lot of birds and animals. For sea lions, loops are notorious. Sea lions, especially young animals, investigate and play with objects they find. An animal that plays with or swims through a loop of material can find itself with an unwanted choker that can strangle it as it grows. Loops in rope, fishing line, nets, packing bands, and rubber inner tube material used to secure crab pots can be deadly. Synthetic materials are the worst, because they are tough and they last.

From 2001 – 2012, biologists documented at least 250 Steller sea lions in Southeast Alaska with some sort of entangling debris around their head or neck. A few have since managed to lose their entanglements and have recovered, some have died or disappeared, and others, like H80, are living with their injuries.

Biologists have been stymied in their desire to help entangled animals. Using a drug to sedate, tranquilize or immobilize a marine mammal is risky – if the animal is darted on shore at a haulout and enters the water, it could drown. Researchers in Canada and Alaska have been developing an innovative three-drug cocktail that works to sedate sea lions but does not interfere with their ability to breathe normally. About 20 adult female Steller sea lions in Alaska have been darted using this drug, and about half those have entered the water without ill-effect. It’s a reversible drug, so rather than waiting for it to wear off, researchers can quickly counteract it when they’re ready to release the animals.

Lauri Jemison, a wildlife biologist and sea lion researcher based in Juneau, said biologists decided that H80 was a good candidate for a disentanglement attempt. The neck entanglement appears to be serious and adversely affecting his health, he’s male (and so does not have a dependent pup or juvenile), and he’s been predictably using Benjamin Island, a haulout where no pups are born that is easily accessed from Juneau, and where sea lion numbers decrease during spring into summer (so the potential to disturb to non-target animals is reduced).

Lauri Jemison scouts the haulout on an earlier trip.

In late May and early June, biologists with the Alaska Department of Fish and Game and the National Marine Fisheries Service Protected Resources received numerous reports that H80 was hauled out at Benjamin Island and the nearby Poundstone Buoy. With all the permits, approvals and notifications in place, biologists prepared to capture H80 and free him from his entanglement on Monday morning, June 10.

H80 spent most of the morning in the water, swimming in front of the haulout. About 4 pm he hauled out on the rocks among a group of about 30 sea lions, mostly juvenile and subadult animals. The capture crew prepared for the darting and included two veterinarians,

The Fish and Game Safeboat approached to about 15 meters and Beckmen, lying in the bow, darted H80 in the right hind leg, an ideal shot placement. H80 entered the water in less than a minute and was monitored closely; as he went under sedation, he continued to breathe well at the surface and responded as expected. Within about 20 minutes he was sufficiently sedated and crew maneuvered next to him. Beckmen attempted to remove the entangling material. She probed the wound extensively and discovered the foreign material had become overgrown and embedded in the flesh. She decided more invasive cutting or surgery would cause more damage than leaving the plastic material in place.

“We had a variety of cutting tools, and it could’ve been so easy,” said Jemison. “But the band was so deeply embedded – you couldn’t see or feel any part of it. Had the band been exposed, we could’ve cut it off very quickly, administer the reversal drug and be done.”

The skiff-side examination in the water was challenging, but went surprisingly well. Had the animal stayed on shore, the veterinarians would have had an easier time evaluating the entanglement, but the end result would have been the same.

After about 50 minutes, Beckmen administered the reversal drug and H80 fully recovered and swam away. H80 has been seen on shore at Benjamin Island multiple times since the disentanglement attempt.

While the crew was unable to remove the entanglement, Jemison said the team considered the attempt a success. They managed to safely approach, sedate, and handle the entangled animal. H80 is the first adult male Steller sea lion to have been darted; the process from darting, handling and assessing the entanglement, and subsequent reversal went very well and was extremely informative to the capture crew.

“We learned a great deal, and this has multiple benefits,” Jemison said. “Researchers have used the three-drug combination to immobilize and then tag adult females during the last three years. We’ve now tried immobilizing an adult male and learned a lot about handling the animal in the water, and have a better idea about which cutting tools might work best under similar conditions.” 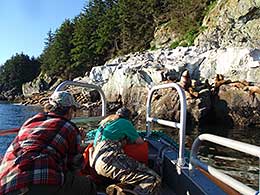 Two easily accessible haulouts between Juneau and Haines, Benjamin Island and Gran Point near the Katzehin River, are used by 200 to 1,500 sea lions throughout the year. Fish and Game and NMFS receive numerous reports from the public and tour operators about entangled animals; these reports along with surveys allow biologists to keep track of entangled individuals and plan for possible disentanglement attempts. Jemison said that under the right combination of conditions a small, skilled, Southeast-based crew could potentially respond to an entangled animal and do so for a low cost.

“It’s not likely that we’d be able to jump in a skiff and go just because we get a call about an animal,” she said. “We need to have the right conditions – a trained crew, calm seas, and knowledge of the animal, such as haulout patterns, and size so that we can determine drug dose, those sorts of things. We do keep track of these (entangled) animals, and tour operators have helped by providing their observations as well. We tracked H80 for weeks, and we had the permits and approvals to do this in place.”

Jemison said other aspects of the capture were encouraging as well. “It was somewhat surprising to us that none of the animals hauled out adjacent to H80 visibly responded when the dart was shot and none entered the water.”

She said H80’s reaction was also relatively mild. While he did appear to notice the dart, there was no evidence of panic or anxiety. He moved into the water in a fairly slow and calm manner. Once in the water, he swam away from the haulout so that subsequent handling did not impact animals on shore. The only notable reaction by other sea lions was that a couple juveniles circled and dove around H80 within the first 10 or 15 minutes of being darted.

Jemison said a number of people have supported the idea of using this technique to attempt a disentanglement and helped navigate the permitting process, including Mike Rehberg (ADF&G), Teri Rowles and Aleria Jensen (NMFS/Protected Resources). Others have supported or worked on the development of the 3-drug combination, especially Marty Haulena (Vancouver Aquarium), Tom Gelatt and others at the NOAA/NMML. Jamie King and Kim Raum-Suryan, previous ADF&G biologists, pursued disentanglement techniques on younger animals, and local tour operators and biologists, in particular Bob Frampton and John Moran, provided important updates on and observations of H80.