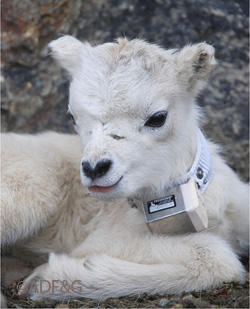 A Dall's sheep lamb with a VHF collar.

Safely capturing animals is an important part of wildlife biology. In some cases, this can be as simple and effective as just grabbing them – this is done with newborn deer fawns and sheep lambs. In the case of Dall’s sheep, that also requires a helicopter ride to a remote, high-elevation lambing area.

Once captured an animal can be weighed, measured, and gender identified; blood and tissue samples can be taken providing information on genetics and health; and animals can be equipped with instruments that provide a wide range of data. Terrestrial animals like Dall’s sheep, bears, moose or caribou are often equipped with a collar-mounted VHF radio (which allows the animal to be located and the device itself to be retrieved) and sometimes also a GPS device (which records or even transmits the animal’s location at set intervals and allows its movements to be mapped). These instruments provide insights into causes of mortality, habitat use, and seasonal movements.

Two videos made during a Dall’s sheep research project are now available on the Fish and Game website showing the capture of Dall’s sheep adults and a lamb. Dall's Sheep Research in the Chugach Range: Capturing Sheep is a 2:35 minute video of wildlife biologist Tom Lohuis using a net gun from a helicopter to capture Dall’s sheep for research. Dall's Sheep Research in the Chugach Range: Lamb Capture is a 5:35 minute video of three wildlife biologists capturing a Dall’s sheep lamb for research. The lamb is equipped with a VHF collar, weighed, and released unharmed. 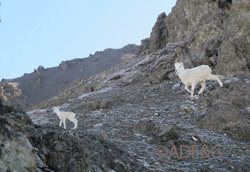 A Dall's sheep lamb and ewe.

There is also a nice overview of the research project, Dall’s Sheep Research in the Chugach Range, prepared by wildlife biologist Tom Lohuis. This is a PDF of a power point presentation with good pictures and information.

Clicking on the icon of four arrows between the word Vimeo and the volume control will enlarge the video. The player is relatively small to facilitate quick loading.