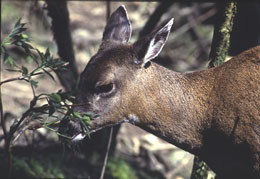 Hunters sometimes use urine-based scents to attract deer or to mask human scent. It is sold in hunting supply stores and through on-line catalogues. Most contain urine from domestic deer, often does in estrus. Deer and elk urine is possible route into Alaska for chronic wasting disease (CWD), a degenerative, fatal illness that affects deer, moose, and elk. The disease has not yet been found in Alaska and wildlife managers are working to keep it out.

“People were using doe urine as a lure in Southeast Alaska, and research has come out showing urine could transmit CWD,” said Kimberlee Beckmen, a veterinarian with the Alaska Department of Fish and Game. “Most urine is produced on game farms, some in states where they have CWD, and there are no regulations or standards in place to ensure that scents are disease free. This is a way to completely eliminate that risk factor.”

The urine is collected over grate systems which allow contamination from feces and saliva. The products are not processed to kill any of a number of infectious diseases – and any treatment with chemicals or heat that could effectively disinfect the product would destroy the scent characteristics.

The Department of Fish and Game Alaska submitted the proposal (104) to prohibit the use of deer and elk urine for use in taking game at the statewide Board of Game meeting in Anchorage this past winter. The proposal was supported by citizen advisory committees across the state, including Sitka and Kodiak where deer hunting is popular.

“There's no treatment, no way to eliminate it once you’ve got it,” Beckmen said. “The only way is to keep it from coming in.”

CWD is spreading in cervid populations in the Lower 48 - cervids are members of the deer family. It was first detected in mule deer at a research facility in northern Colorado in the late 1960s. By the mid-1980s, it was found to have spread to free-ranging deer and elk in Colorado and Wyoming.

Over time the diseased continued to spread. It’s been found in free-ranging deer and elk (and in captive or farmed deer and elk) in 19 states and two Canadian provinces. CWD has also been detected in wild moose in Colorado and Wyoming. This month, Texas announced that CWD had been detected in that state for the first time.

Although the disease has not yet been found in wild caribou, evidence from genetics studies conducted in collaboration with the Alaska Department of Fish and Game indicates that caribou are highly likely to be susceptible.

Since 2002, Fish and Game’s Division of Wildlife Conservation has tested almost 3,000 animals for CWD – and all proved to be disease-free. About 400 moose, 2,000 Sitka black-tailed deer, 160 wild elk and 85 caribou were tested; many were provided by hunters or were road-killed animals. Beckmen said necropsies were also performed on animals that were obtained that had any suspicious signs. 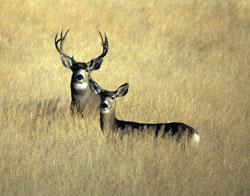 Mule deer. Mule deer in northern Texas were recently discovered to be carrying CWD, making Texas the 19th state with the disease in cervid populations.

“If they were skinny or seemed to have neurological disorders, they were tested,” she said. “There was a lot of roadkill on the Kenai and the Matsu this winter, and those were tested as well. But that was the last of the surveillance program, the federal funding for CWD testing has been eliminated.”

There are about a dozen facilities in Alaska with privately owned elk and the CWD status of those animals is unknown. Domestic elk and reindeer are considered private livestock and are imported under regulations covering livestock. Game farms are not regulated by Fish and Game and CWD testing there is voluntary. Deer are wild game and can’t be imported without a permit from ADF&G.

There is no evidence that CWD can be transmitted to humans or domestic livestock like cattle, but the disease is a real concern for deer, moose and elk populations. CWD is caused by an infectious protein called prions and is in the same group of diseases as bovine spongiform encephalopathy (BSE or Mad Cow Disease). No treatment is available for animals affected with CWD, and there is no vaccine available yet to prevent CWD infection in deer or elk. Once clinical signs develop, the disease is invariably fatal.

That extended incubation period – some 18 to 24 months on average between infection and the onset of clinical signs – makes controlling the spread of the disease more difficult. Infected animals may not show symptoms, and infected animals or animal parts may more easily be spread inadvertently. Another problem is the infectious agent – prions.

Prions are extremely resistant to degradation and can persist in the environment for decades in contaminated soil. Prions can also be found in deer saliva, feces and urine, and in the soil where an infected carcass decomposed or where infected animals lived.

A number of states and Canadian provinces have already banned the use of hunting products that contain fluids or tissue from any cervid.

“We want to close all the loopholes to bring CWD up here; we want to remain CWD free,” Beckmen said. “The only way we’ll be able to stay that way is banning at-risk materials.”