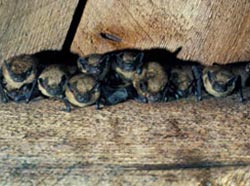 Bats roosting in a building

A roost is a structure that bats use for shelter. In summer, groups of adult females roost together in maternity colonies to give birth and raise their young. Maternity roosts must be warm to promote growth of the young bat pups, which is why buildings and attics are popular roost sites for species such as the little brown bat. Other species roost in tree cavities, under bark, or even under boulders or in rock crevices at hot springs! In contrast to adult females, males and juvenile females usually roost alone or occasionally in small groups in the summer. Locating maternity roost sites is an important first step toward monitoring summer bat populations. 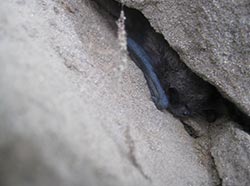 Bat nesting in rock crack during winter near Trapper Creek 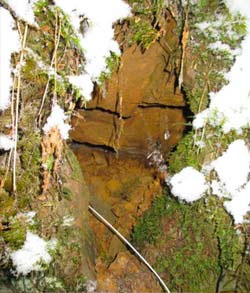 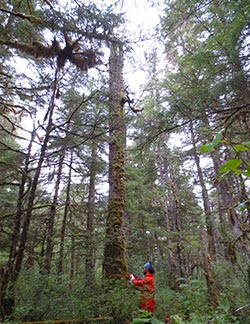 In winter, bats must either migrate to warmer climates or hibernate. A hibernating bat drops its body temperature and metabolic rate to conserve energy during the winter, when no food is available. Therefore, hibernating bats need a winter roost (also called a hibernaculum) that will stay cold, but remain above freezing. Caves and abandoned mines are popular winter roost sites in the East and Midwest, but bat biologists still don't know where most western bats spend the winter. Some western bats do winter in caves and mines, but the numbers are small — tens to hundreds rather than the thousands to hundreds of thousands common in cave systems in the northeast.

In Southeast Alaska, small numbers of bats have been documented hibernating in caves on Prince of Wales Island, but an ongoing radiotelemetry study in the Juneau area has found little brown bats overwintering locally, in old rock slides or root wads. Acoustic monitoring in the Juneau area has resulted in detections of at least 3 species in winter: little brown bat, California myotis, and silver-haired or big brown bat, further evidence that these species are overwintering nearby. Bats in more northern areas of the state are believed to hibernate in buildings, but many questions remain about what Alaska's bats do in winter. Finding out has become a high priority due to the ongoing spread of White-nose Syndrome, a fungal disease that has killed over 5 million cave-hibernating bats in eastern North America since 2006.

How You Can Help

Report a roost: If you know the location of a bat roost that is regularly used by more than one bat, please complete the online Bat Report Form.

Monitor a roost: Help document maternity colony size and timing of reproduction by volunteering to count bats as they emerge from their roost in the evening. Please visit the Alaska Center for Conservation Science for more information.