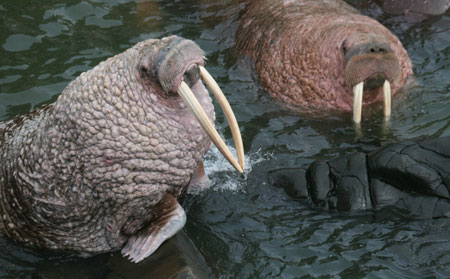 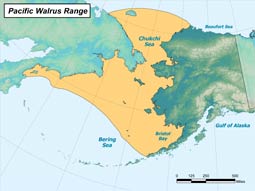 The Pacific walrus is a large pinniped (i.e., the group that includes seals, sea lions and fur seals) that lives in the Bering and Chukchi seas where they haul out on sea ice and along the mainland coast and islands of Russia and Alaska. Walruses are strong bodied and have a very thick, tough hide that can be an inch thick. The most distinctive feature of walruses, both male and female, is their two ivory tusks, which are long upper canine teeth that grow throughout their life. Walruses also have hundreds of short, strong, highly sensitive whiskers that they use to search the seafloor for their food.

Adult males, or bulls, are up 12 feet long and may weigh up to 2 tons; although females are smaller they can weigh more than 1 ton. Bulls are identified by their larger size, broad muzzle, heavier tusks, and many large bumps on their neck and shoulders called “bosses”.

Females begin breeding at 6-7 years of age and generally give birth every 2 years. Males are mature at 8-10 years of age, but generally cannot successfully compete against older, larger males for females until they are 15 years old. Walruses may live up to 40 years. Unlike the other Alaskan pinnipeds, walruses mate in the water during the winter months (January-March). However, delayed implantation of the fertilized egg is suspended from further development for several months, resulting in a total gestation period of 15 months, the longest of all the pinnipeds. Walrus calves are born on ice floes in late spring and weigh approximately 140 pounds. Calves typically stay with their mothers for two years and weigh approximately 750 pounds when they become independent.

Walruses eat a wide variety of soft invertebrates found on or below the seafloor by using their sensitive whiskers to search for prey. Prey items include, clams, snails, worms, sea cucumbers, and tunicates. Except for their tusks, walrus teeth are flat; as a result, walruses eat by sucking food into their mouths using the powerful suction created by pulling their piston-like tongue back quickly. Walruses suck out the soft parts of clams and snails leaving the shells to fall to the sea floor. Some walruses, mostly males, are known to occasionally prey on seals and seabirds.

Walruses are highly social animals that travel and rest in large groups. The mother/calf bond, which lasts for approximately two years, is the longest and strongest among pinnipeds. Female walruses are known to become dangerously aggressive if their calf is threatened.

When sea ice is not available, walruses will commonly rest on rocks, sandy beaches, and even grassy hills. Resting on land allows walruses the opportunity to form large social haulouts that can contain tens of thousands of individuals. Walruses use their tusks to help pull themselves onto rocks or ice, to move ice to create an opening to dive through, and to fight off predators. The most common use of tusks is social. Females will threaten and jab each other for better position on haulouts and during the breeding season, male walruses will threaten and fight with their tusks to compete for females. When two males come together, they will raise and turn their heads sideways to display their tusks, and the walrus with smaller tusks will move away. If the two males have similar sized tusks, they will usually fight and may stab each other with their tusks, inflicting bruises and punctures. Walruses do not use their tusks for digging on the seafloor for food.

The Pacific walrus population spends the winter on the Bering Sea pack ice before separating in the spring. Beginning in the spring, females with young migrate northward from the Bering Sea to the Chukchi Sea, often passively moving with the receding sea ice. Most adult males migrate to Bristol Bay where they rest on land haulouts between foraging bouts. By late fall, walruses begin their return migration southward from the Chukchi Sea to the Bering Sea, ahead of the advancing sea ice. The males that remained in Bristol Bay head north to meet the returning population in the waters near St. Lawrence Island.

Pacific walruses range over the relatively shallow waters of the northern Bering and Chukchi seas, and are occasionally observed in the waters of the Eastern Siberian and Beaufort seas. In the Bering Sea, walruses are distributed from the Bering Strait to Bristol Bay in the east, and in the west their range extends as far south as the Kamchatka Peninsula. They also use island haulouts near St. Lawrence Island and on the Pribilof Islands.

A 2006 aerial survey, conducted by the U.S. Fish and Wildlife Service (USFWS), estimated the population at 129,000, but due to the difficulties in counting walruses the confidence of that estimate is low and the possible range in population size is somewhere between 55,000 and 507,000. After reviewing available scientific and commercial information, the USFWS found that listing the Pacific walrus as threatened was warranted because of the decrease in sea ice caused by climate warming. Currently, however, the listing is precluded by higher priority actions to list other species. The USFWS will develop a proposed rule to list the Pacific Walrus as their priorities allow and will make any determination on critical habitat during development of the proposed listing rule. To learn more, visit the ADF&G Special Status page for Pacific walrus.

Pacific walrus population size has varied substantially in the last 150 years, it increased between 1960 and 1980 and may have reached the carrying capacity of the marine environment. By the 1990s, the population was believed to be stable or in decline, and the current trend is unknown.

Potential threats to the Pacific walrus population include a reduction in sea ice, predation by killer whales and polar bears, and if traffic of large vessels increases there could be threats from pollution, ship strikes, and entanglement in trash. Specifically, recent changes in the thickness and duration of sea ice may affect walrus distribution and feeding opportunities as less ice is available. Walruses use sea ice as a stable, yet drifting, platform for resting between foraging trips, calving, and traveling. With less sea ice, walruses will likely spend more time on shore haulouts along the Russian and Alaskan coasts where foraging trips may be more limited to foraging grounds nearby. Calves and yearlings suffer increased mortality on terrestrial haulouts when disturbances cause the herd to panic and rush to the water running over and crushing the smaller animals.

Walruses are an essential nutritional and cultural marine resource used by Alaska Natives throughout western and northern Alaska. Several thousand walruses are legally harvested in Alaska and Russia every year. The meat, blubber, skin, and organs provide a healthy and rich source of food, the hides can be processed into rope or used to cover boats, and the stomach lining is used to make traditional drums for Eskimo dances. The ivory tusks are hand carved into jewelry, artwork, and other handicrafts. 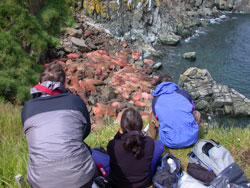 Pacific walrus have appealed to and attracted much attention in literature, folklore, and artwork. They are a popular subject for wildlife viewing, photography, artwork, and ecotourism, which provides jobs and economic benefits to a number of communities in Alaska.

In 1941, the commercial harvest of walruses was banned in the United States. Passage of the Marine Mammal Protection Act (MMPA) in 1972 further protected walruses from overharvest by restricting the harvest to only Alaska Natives for subsistence and handicraft purposes. The annual harvest in Alaska is monitored by the U.S. Fish and Wildlife Service (USFWS).

Management issues are jointly addressed by the USFWS and the Native co-management organization the Eskimo Walrus Commission (EWC). The EWC was established in 1978 to represent coastal walrus hunting communities in Alaska. In 1997, the EWC and USFWS signed a cooperative management agreement for the conservation and management of walruses.

The Walrus Islands State Game Sanctuary in northern Bristol Bay, approximately 65 miles southwest of Dillingham, was created in 1960 to protect a group of 7 small islands and their adjacent waters, including Round Island, a terrestrial haulout for mostly male Pacific walruses in summer. The sanctuary provides important habitat for walruses and is one of 4 regularly active haulout sites in Bristol Bay. The sanctuary also protects habitats important for other wildlife including Steller sea lions and nesting seabirds. The Alaska Department of Fish and Game (ADF&G) manages the sanctuary primarily to protect the habitats and the species that use them, but also to provide for public use and enjoyment of these resources including the opportunity for scientific and educational study, viewing, and photography. The subsistence hunting of walruses is allowed on Round Island and cooperatively regulated by the USFWS, ADF&G, and the Qayassiq Walrus Commission.

Additional research of the Pacific walrus population is conducted by the U.S. Geological Survey and the U.S. Fish and Wildlife Service.