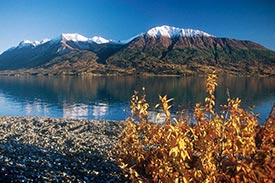 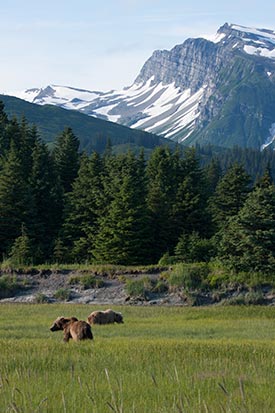 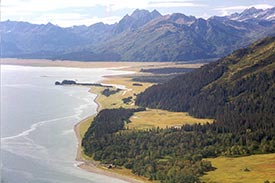 Chinitna Bay on the south coast of Lake Clark park.

The scenery in this park and preserve is unrivalled. Two active volcanoes, Iliamna and Redoubt, rise more than 10,000 feet and vent steam from snow-capped peaks. On the eastern flank of the Chigmit Mountains, rivers cascade to Cook Inlet through forests of Sitka and white spruce. Swans and other waterfowl nest on marshes and outwash plains. Puffins, cormorants, kittiwakes, and other seabirds raise their young in rocky cliffs. Offshore, harbor seals and beluga whales prey on eulachon and other fishes. The western flank of the Chigmits descends through tundra-covered foothills to boreal forest. Lakes and rivers fill the valleys, the water flowing southwestward to Bristol Bay. This region is rich in breeding birds, including golden plovers, wandering tattlers, and surfbirds. Arctic grayling, rainbow trout, Dolly Varden, lake trout, northern pike , and five species of salmon populate the waters. The valleys are home to Dall sheep, caribou, moose, brown and black bears, wolves, lynx, foxes, and other mammals.

The park has no developed trails or other public facilities. Visitors may hire a guide. Enjoy a float trip down one of the park’s wild rivers or a backpacking trip through the open tundra of the western foothills. Between June and early August, viewers may see up to 30 brown bears along the tidal marshes of Tuxedni and Chitina Bays. In June, harbor seals bear their pups in Tuxedni Bay.

The park has no highway access. Scheduled flights carry visitors from Anchorage to Iliamna and Port Alsworth. Chartered flights are available from Anchorage, Kenai, or Homer.