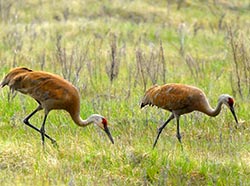 The small park at the Warren Ames Memorial Bridge gives foot access to the south bank of the Kenai River and the extensive marsh that reaches five river miles to the sea. In early May, thousands of sandhill cranes and other migrating waterfowl feed in the sedge and grass communities to the west. Shorebirds work along the banks. Caribou forage in this area from June through August. Moose browse along the edges. Several species of owls patrol the flats. Watch for coyotes afoot and northern harriers aloft, both seeking avian snacks in the sedges. Parasitic jaegers are sighted annually in this area.

The ebbing tide draws shorebirds to the newly exposed beach and stimulates salmon to migrate upstream in the current. Moose browse early and late in the day. Watch for caribou crossing the flats, especially east of the highway on the north side of the river. Investigate the boardwalk and viewing scopes located north of the river on the west side of the highway.

Stay off the marsh during spring and summer to avoid disturbing nesting birds.

In Kenai, turn south on the Bridge Access Road from milepost 10.8 of the Kenai Spur Highway. The Warren Ames Memorial Bridge crosses the river about 2.6 miles to the south, with viewing sites on the west side of the highway. The road continues another half mile to the Kalifornsky Beach Road.