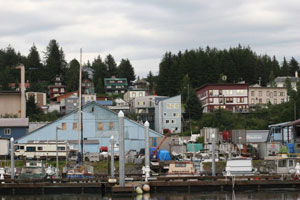 Cordova is the gateway to the Copper River Delta. This 700,000- acre wedge of wetlands surrounds the Copper River’s outlet into the Gulf of Alaska, reaching from the ocean to the Chugach Mountains.

In this productive region, a variety of wetlands, such as sloughs, mudflats, saltwater marshes, and freshwater ponds, sets the stage for a range of unique wildlife viewing opportunities.

The Chugach National Forest, managed by the US Forest Service, surrounds Cordova. Before setting out, stop by the Forest Service office to ask about recent sightings and learn about area trails, cabins, and other recreation facilities. The Cordova Historical Museum also keeps a binder of local birding and other information at the front desk. The Ilanka Cultural Center offers cultural exhibits and a fully articulated orca skeleton, one of only five in the world.

You need not go far to spot wildlife in Cordova. Seals and sea otters are common in the small-boat harbor, particularly in colder months. But once you’re in town, having access to a car will greatly expand your opportunities to explore one of North America’s largest and most important wetlands. Rent a car locally or arrange to bring one by ferry.

A 10-minute drive from downtown Cordova, the road ends in the restored cannery town of Orca (part of a private lodge) at Orca Beach, a mussel-encrusted, rocky beach overlooking Orca Inlet. Nearby roadside pullouts offer areas to watch for seabirds, sea otters, harbor seals, and whales. Explorer Don Salvador Fidalgo originally named Orca Inlet Puerto Cordova, after the city of Cordoba in Spain, in 1790. Michael Heney, who built the railroad connecting the town to the Kennicott mine, named the town Cordova in 1906.

Lined chitons (pronounced “ky-ten”) are camouflaged for their preferred habitat on rocks with pink encrusting coralline algae. River otters and harlequin ducks are among the animals that feed on these small (two-inch-long) mollusks. Harlequins use strong “nails” at the tips of their bills to break the suction and detach chitons.

Power Creek Road winds around the western shore of Eyak Lake. It starts by a lakeside airstrip populated with glaucous-winged gulls then passes marshlands, waterfalls, and a salmon spawning stream before it ends in a dense forest.

The trick to transforming the drive into a successful wildlife-viewing safari is to make frequent stops to look and listen. In a moving car, even the most alert passenger will never hear the splash of a beaver’s tail beneath the undercut of a lake shore or spot an American dipper diving in the stream above a nearby waterfall.

Stop to observe, open your window, or step outside, and you may be rewarded with such surprises as a rufous hummingbird mistaking you for a flower. (It helps to wear a brightly-colored shirt!)

Hundreds of trumpeter swans winter on Eyak Lake. In spring and summer, watch for dusky Canada geese, which nest only on the Copper River Delta. Lake life also includes common mergansers, harlequin ducks, and—could that be a seal? Yes! Harbor seals are occasionally spotted in the freshwater Eyak Lake, which empties into the Gulf of Alaska via Egg Island Channel.

Along the creek, spawning salmon attract bald eagles and bears. You may spy as many as 10 to 20 brown bears at once as they feed on sockeye salmon from mid-June to mid-August.

Locals may tell you of recent bear sightings but there are no developed bear-viewing areas.

The abundance of salmon influences how much of the fish a bear eats. When salmon are plentiful, bears target the roe in females and the body flesh, brain, and dorsal hump in males. When fish are scarce, they eat more of each fish caught. Gulls, eagles, and other wildlife scavenge the parts that remain—what’s uneaten decomposes, adding nutrients to streamside soils.

Bears are most active in the morning or late evening (after 8 or 9 p.m.), when the sun is less strong. If you do happen to see them, remain quietly in your vehicle and don’t tolerate or encourage close contact. Never feed bears or other wild animals or do anything else that may disrupt their behaviors around humans. If you plan to hike in bear country, refresh your knowledge about current bear safety recommendations.

Set aside a full day for a drive down the Copper River Highway and across the Copper River Delta to Child’s Glacier. In midsummer, the best wildlife watching occurs during the cooler hours of early morning or late evening. Miles of bumpy dirt road may try your patience, and brushy roadsides will sometimes obscure the view, but those who make it to the end will find a spectacular payoff. Pack a lunch and plan a leisurely pace with time for many stops and at least a couple of hours to spend at the Child’s Glacier viewing area. Frequent calving is common in summer. Read the posted warnings, and use the viewing platform. Large calving events can send deadly waves washing across the entire park area. The Child’s Glacier site offers a wide variety of bird and wildlife sightings. Park hosts say local bears have learned to gather up salmon left flopping on the shores after iceberg-generated waves.

About 25 miles down the Copper River Highway, take Alaganik Road to Alaganik Slough. A thoroughfare for coho and sockeye, the slough is accessible by trails, picnic areas, and boat ramps. The Pete Isleib Memorial Boardwalk winds 950 feet past ponds and sloughs and includes a wildlife viewing blind, a river overlook, and an elevated viewing platform. This pleasant wetlands walk takes viewers across marshlands to look and listen for birds and other wildlife, including moose, wolves, and bears.

Don’t wait until you reach the boardwalk to start looking for birds. On your drive down Alaganik Road, you might spot a short-eared owl alighting in the middle of the road or a northern harrier gliding low over the ground.

In winter, moose are frequently sighted from Alaganik Road. They are less visible during the hunting season in September and October.