New Brochure and Videos Now Available:
Learn to Release your Pet from Traps and Snares

A new brochure, Trap Safety for Pet Owners (PDF 478 kB), produced by the Alaska Department of Fish and Game and the Alaska Trappers Association, illustrates how to remove pets from traps and snares. Visit your local ADF&G office if you would like a paper copy of this brochure.

ADFG has also developed a series of short videos on how to release pets from specific kinds of traps.

Part 1: How to remove your pet from a body-grip trap

Part 2: How to remove your pet from a coilspring foot-hold trap

Part 3: How to remove your pet from a longspring foot-hold trap

Part 4: How to remove your pet from a jump trap (foot-hold trap)

Part 5: How to remove your pet from a snare

No one wants to see a dog caught in a trap intended for a marten or a wolf, but it occasionally happens. Many of Alaska’s communities are adjacent to prime wildlife habitat. Trappers are drawn to these areas, as are dog walkers, snowmachine riders and hikers. Some residents close to these areas allow dogs to roam free, and pets sometimes wind up in traps.

The Alaska Trappers Association has produced a 30-minute video, "Sharing Alaska's Trails," to address this issue.

Long-time Fairbanks trapper Pete Buist is the narrator on the video. Buist, a hunting guide and former state game board member, is also a former president of the ATA. Buist has trapped for 40 years, and for 20 years he used a dog team to tend his trap line.

"The content was largely dictated by some of the comments we’ve heard over the years from people who have had dogs and cats caught," Davila said. 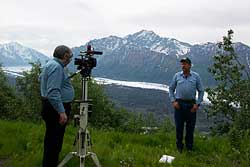 "It’s primarily directed at folks with dogs, but we talk about shared trail use and other issues," said ATA vice president Randy Zarnke. Zarnke said trappers targeting wolves will sometimes cut a trail and set wolf traps in the trail. "If recreational snow machine riders ride down that trail, that will put the traps out of commission."

"It’s good for folks who are snowmachining to recognize that they are on a trapline, as opposed to just any other trail," Davila said.