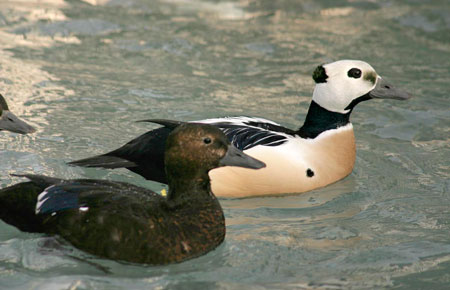 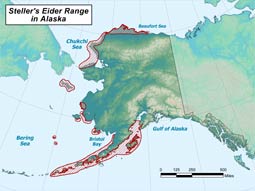 The Inupiat name for Steller’s eider, Igniquaqtuq, means “the bird who travels with fire.”

Eiders are sea ducks, a group of diving ducks that breed inland but generally spend the rest of the year in coastal marine waters. The Steller’s eider is the smallest of the four eider species. Males are unusually colorful but both sexes have an iridescent blue wing patch, lined above and below by white, which is unique for a sea duck and more similar to a dabbling duck such as a mallard. The male's white head has a black spot behind each ear and green shading at the back of the head. The eye is surrounded by black and the bill is bluish gray. The white head is offset by iridescent blue-black under the chin and in a broad collar pattern extending down the back. Large white shoulder patches and white-lined deep blue scapular plumes provide bold contrast on the back and sides. The light breast, sides, and belly of males is shaded front-to-back from a tan to deep rust.

The female Steller’s eider is mostly brown and much less distinct than the male. The blue wing patches, blue-gray feet, white wing linings, and smaller size distinguish the female of this species from other eider species.

Steller’s eiders first breed at 2–3 years of age. Pair bonding occurs in the winter, and the eiders move to Arctic nesting grounds as the spring sea ice breaks up. They are solitary breeders that prefer to nest on islands or peninsulas in tundra lakes and ponds near the coast. The female selects a nest site while the male performs distraction flights. The nest is built out of grass then lined with down during egg laying. Females generally lay 5–7 olive-brown eggs. Males typically leave once incubation begins. Females incubate the eggs for 25–28 days until hatching.

Ducklings are precocial and hatch with open eyes and a dark brown layer of down. They can thermoregulate and walk soon after hatching, allowing them to leave the nest within 24 hours. Mothers stay with their young throughout brood rearing. Young birds can fly within 5–7 weeks of hatching.

Steller’s eiders forage by diving or dabbling in shallow water. On the breeding habitats, Steller’s eiders primarily eat insect larvae associated with freshwater wetlands but may also eat aquatic plants. In marine habitats they eat small fish and saltwater invertebrates, including snails, clams, worms, and echinoderms found in the bottom sediment. They forage singly or in large flocks that often dive and surface in unison.

Males perform courtship displays for females, with as many as 3–7 males following a single female. Courtship behaviors include a series of head-turns, shakes, and rearing out of the water. Males also perform aggressive displays towards other males, including chin-lifts which display the black chin-patch.

Steller’s eiders migrate long distances each year, up to 4,800 kilometers, between their breeding and wintering grounds. They migrate side by side in long lines only a few feet above the water. They generally travel along coastlines or follow open leads in the ice. Migration northward to the breeding grounds begins in late-April. They reach their nesting sites in the Arctic tundra in late May to early June. Males leave the breeding areas by early July to travel to molting areas. The females remain on the breeding grounds until the chicks fledge. Then they travel to molting areas or directly to wintering grounds further south.

Almost all Steller's eiders nest in northeastern Siberia, with less than 1% of the population breeding in North America. In the winter, most of the world’s Steller’s eiders are found in the Alaska Peninsula and the Aleutian Islands. Others winter as far west as the Commander and Kuril Islands of Russia and as far east as Kodiak Island and Kachemak Bay in Cook Inlet, Alaska.

Historic numbers and distribution of Steller’s eiders were significantly greater than current times. However, most information prior to the 1970s is anecdotal so it is difficult to accurately quantify the decline in numbers and the contraction of the breeding range. As of 2010, 600 Steller’s eiders or less arrive on the Alaska breeding grounds each year with most near Barrow. The Alaska-breeding population is listed as threatened under the Endangered Species Act (ESA) and is a State of Alaska species of special concern. To learn more, visit the ADF&G Special Status page for Steller's eider.

Threats to the Steller’s eider include predation, lead poisoning, contaminants, and long-term or cyclical changes in the marine environment. The effect of climate change on Steller’s eiders is unknown. Steller’s eider eggs and ducklings are vulnerable to predation by ravens, jaegers, snowy owls, Arctic and red foxes, and large gulls. On the wintering grounds, birds are vulnerable to bald eagles. Lead poisoning due to ingestion of spent lead shot was historically a significant source of mortality. However, lead shot was outlawed for the hunting of waterfowl in 1991 making it less of a threat today. Contaminants are also a concern for this species due to their habit of congregating in large dense groups in a few areas. Contamination, such as an oil spill, in a wintering or molting area, could have a major impact on the entire population.

Steller’s eiders were once targets of waterfowl hunters. Hunting of eiders was ended in 1991.

Management of Steller’s eiders falls under the jurisdiction of the US Fish and Wildlife Service (USFWS). Management by the USFWS is governed by the Migratory Bird Treaty Act. Sport hunting for this species was closed in 1991. Subsistence hunting is also closed. The Steller’s eider is also protected under the Endangered Species Act.