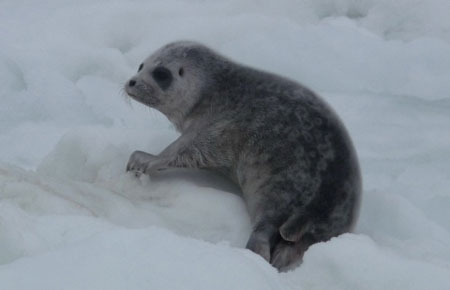 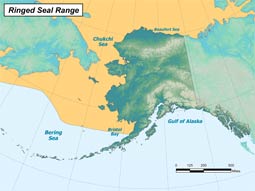 Ringed seals make snow caves (lairs) above some breathing holes to rest and give birth.

Ringed seals are the most common prey of polar bears; in fact, a polar bear may kill a ringed seal every 2 to 6 days. Ringed seals are also preyed upon by walruses and killer whales. Pups are eaten by polar bears, arctic foxes, red foxes, and ravens. Arctic foxes and polar bears can locate seal lairs by smell. During pupping, foxes will tunnel into the lairs to catch the pups. Polar bears will run and jump on the snow over the hole to collapse the lair and block the exit so it can catch the mother and the pup.

Females give birth to a single pup within a subnivean (snow covered) birth lair. Pups are born covered in lanugo, a coat of white wooly hair that insulates them until they can build fat reserves. Lanugo is shed at 2 to 3 weeks. The average weight of pups at birth is 10 pounds (4.5 kg). Females nurse pups for about two months and during that time the pup doubles its birth weight. Weaning usually takes place at ice breakup. Most females breed again within a month after giving birth. Implantation of the embryo is delayed until mid-July or early August so that pregnancy lasts about 11 months. Most female ringed seals first ovulate at 5–6 years of age and first give birth at 6–8 years. Males become sexually mature at the same age.

Breeding takes place in April to May. During this period rutting males exhibit territorial behavior and emit a strong scent from glands of their faces; due to their scent, hunters refer to them as “kerosene” or “gasoline seals” and avoid harvesting them because they do not taste good. Polar bears also avoid male ringed seals this time of year.

Ringed seals are opportunistic and eat a variety of invertebrates, fish, and amphipods. The particular species eaten depends on availability, depth of water, and distance from shore. In Alaska waters, the important food species are arctic cod, saffron cod, shrimps, and other crustaceans.

Breeding ringed seals return to the same breeding territories in heavy shorefast ice each year while juvenile ringed seals migrate south to the ice edge for the winter, but it is unknown if young seals return to their birth region when they are old enough to breed. Ringed seals are also seen and harvested during ice-free periods in the Bering, Chukchi, and Beaufort seas. They often move long distances this time of year, but their movements are not well understood.

Genetic studies have not delineated any stocks or separate populations and there are no reliable population estimates available for ringed seals. Numerous surveys have counted seals in portions of their range, but there is not enough information about movements and how to correct for the number of seals that were under the ice during the survey. Based upon these data, there are at least 250,000 ringed seals in Alaskan waters; the true number is probably much higher. Ringed seals were listed as ‘threatened’ under the Endangered Species Act (ESA). Worldwide, it is believed there are 6–7 million ringed seals.

Because of their dependence on sea ice, there is concern that climate change may negatively affect ringed seals and their habitat. Changes in sea ice thickness, coverage, formation timing, and duration of coverage due to climate change may substantially alter the quality and amount of sea ice and snow necessary for resting, molting, and pupping. Activities associated with offshore oil exploration and recovery could affect ringed seal distribution and the prey they feed on. However, the effects of direct contact with oil and industrial disturbances on ringed seals have not been studied.

Ringed seals are hunted by Alaska coastal Natives from Bristol Bay to Kaktovik for food and oil. Seal oil is an important addition to many foods for coastal people but is important and often traded for far inland as well. Ringed seal oil is also used on bearded seal skins and sinew for sewing boat covers to make the stiches waterproof. Ringed seal skins are used for clothing, equipment, and crafts. Current harvest is unknown, but indications are that although the harvest is substantial it is sustainable and harvest was not considered to be a factor in the pending ESA action to list the species as threatened. The Ice Seal Committee and the Alaska Department of Fish and Game are surveying a sample of coastal villages to document and monitor the harvest of ringed seals.

Management of ringed seals falls under the jurisdiction of the National Marine Fisheries Service (NMFS) and their co-management partner the Alaska Native Organization called the Ice Seal Committee (ISC). NMFS and ISC have a signed a co-management agreement in 2006 and meet regularly to discuss research and management issues related to all ice seals, including ringed seals. Although the Alaska Department of Fish and Game has no management mandate they work with NMFS and ISC on research projects including biosampling the harvest to monitor population health and status, satellite telemetry to study movements and habitat use, and harvest surveys to document subsistence needs. See the research section for details.

The Alaska Department of Fish and Game has been conducting research on ringed seals since the 1960s. Current research projects include: