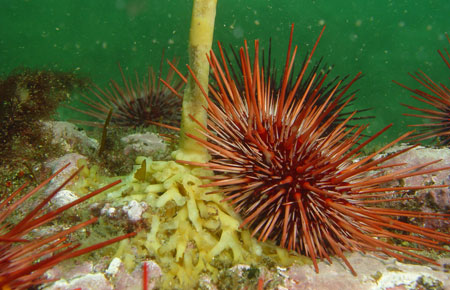 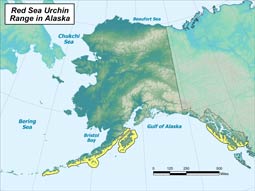 Red sea urchins, Mesocentrotus franciscanus, belong to the Phylum Echinodermata and class Echinoidea. This phylum also includes sea cucumbers and sand dollars, one of their common traits is their radial symmetry. They vary in color between a uniform red and dark burgundy and crawl slowly over the sea bottom using their spines as stilts.

The red sea urchin is the largest of the sea urchins, with a maximum "test", or outer skeleton, diameter of more than 18 cm and a maximum spine length of 8 cm. The test is made up of 10 fused plates that encircle the sea urchin like the slices of an orange. Every other section has holes through which the sea urchin can extend its tubed feet. These feet are controlled by a water vascular system. By changing the amount of water inside, the animal can extend or contract the feet. The tip of the tube foot is shaped so it can act like a suction disc. Spines can also be used for locomotion.

Reproduction occurs between March and September in Southeast Alaska. Urchins are broadcast spawners with external fertilization and aggregate during spawning. Female urchins may produce 100,000 to 2,000,000 eggs into the sea where they are fertilized. After fertilization, they develop into a morula and eventually become 8-armed echinopluteus larvae which are herbivorous, feeding on phytoplankton. After the larvae stage, they develop into juveniles and eventually settle onto the substrate. After settling, a rapid metamorphosis occurs including development of spines and tube feet and then internal organs form similar to an adult sea urchin. They seem to reproduce best when in dense aggregations.

Small urchins (less than 5 cm test diameter) often hide under the adults. Adult urchins can release a chemical cue that causes the young to aggregate underneath them when the adults detect the presence of certain kinds of starfish. Some research suggests that urchins can live over 100 years, and found some near Vancouver Island that may be 200 years old.

Field studies of annual growth rates in Southeast Alaska indicate an annual growth increment between 0 and 20 mm. Growth rate is generally greatest among urchins between 20 and 40 millimeters, with large variation among locations and years. Slower growth occurs in areas exposed to open ocean conditions. By age ten urchins have almost stopped growing in diameter and growth slows considerably.

The mouth of the urchin is on the bottom (oral) part of the test. Food is chewed by 5 teeth which are part of a complex mechanism called Aristotle’s lantern. The chewed food then moves through the esophagus, stomach, and then intestine. When food enters the intestine and forms round pellets which are later excreted through the anus, which is at the top (aboral) side of the test.

Red sea urchin larvae feed on microorganisms using cilia to sweep them into their mouths. As juveniles, sea urchins feed on diatoms and smaller food. Adults feed primarily on kelp (especially Nereocystis or Macrocystis) but can eat sessile invertebrates. Often forms large subtidal aggregations in or near kelp beds.

Their range occurs from Northern Japan and Alaska to Baja California. In Southeast Alaska, the red sea urchin occurs primarily on rocky shorelines of the outside coast with largest concentrations in southern southeast. They can inhabit intertidal depth to up to 90 m.

Commercial and subsistence fishers harvest red sea urchins in Southeast Alaska. Urchins are harvested for their gonads, commonly called roe or uni, with no distinction made between males or females. The commercial fishery mostly markets the uni fresh and primarily in Japan.

In 1996, ADF&G and the sea urchin industry developed interim regulations and a management plan for the commercial urchin fishery in Southeast Alaska. This plan was implemented during the 1996/1997 season. The regulations were adopted by the commissioner under authority of 5 AAC 39.210 for High Impact Emerging Fisheries and became effective in December 1996. In 1997, the Alaska Board of Fisheries adopted the red sea urchin management plan. The core elements are: 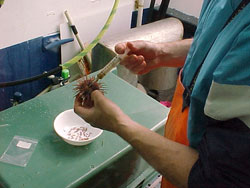