(Palmer) – Savvy bird hunters may choose to wait another week or two before stepping into the field, even though upland bird hunting seasons opened last weekend in most parts of the state and indicators are that grouse and ptarmigan hunting this fall will be good. The reason, says Statewide Small Game Biologist Rick Merizon, stems from this year’s late spring.

Upland game bird seasons opened in most regions on August 10, as usual. Unfortunately, nesting this year was generally delayed for grouse and ptarmigan due to a late, cold spring with deep snow into early June. As a result, Merizon says early-season hunters should expect to see smaller-than-normal birds of the year.

“Radio-collared hen willow ptarmigan observed on their nests had average egg production in late June,” says Merizon, who spent much of the spring and summer traveling across Alaska studying and monitoring grouse and ptarmigan.

He expects subsequent chick survival was high thanks to a warm, dry summer and strong insect production. However, the late snowmelt delayed nesting overall allowing young birds less time to grow prior to the opening of hunting seasons.

“Chick size is smaller than we normally see this time of year for most monitored populations,” Merizon says. 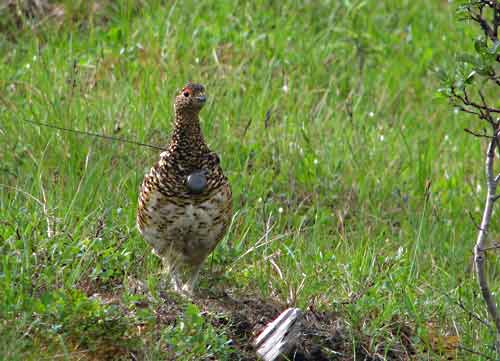 A willow ptarmigan hen, radio-collared for tracking by Statewide Small Game Biologist Rick Merizon, stands alert near her nest in June. A late spring delayed nesting, meaning young birds in many areas may need another week or two to mature. (Photo by Rick Merizon, ADF&G)