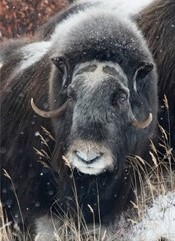 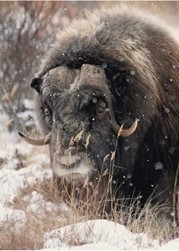 Horns are not present and size can vary since calves are born between mid-April and mid-August.

Since the long guard hairs have not yet grown, the coat at this age appears very short.

Horns are not present and size can vary since calves are born between mid-April and mid-August.

Forehead is covered with white hair. Horns are short and no horn bases have developed.

Dramatic growth has taken place and the horns are much thicker than cows. By spring, horns curve down slightly and point forward.

Horn tips point up and the downward curve of horns becomes more pronounced and forward in bulls.

Forehead is covered with white curly hair. The horn boss has not begun to develop.

Horns on cows are more slender than males but otherwise very similar in shape. Horn tips curve up.

Forehead is covered with white curly hair and the horn base is not visible.

The horn boss begins to develop but it does not cover the entire forehead.

Early, there is no boss development (see above) however later in the year, the boss will have expanded over the forehead (see below).

Horn boss has expanded over the forehead and increases in size. The horn hooks are much thicker on the male.

Horns are near full size and forehead is covered with white hair. Body size is approximately that of an adult.

Three-year-old cows have thin-tipped horns that curve upward with a considerable amount of fuzzy white hair between the horn bases.

The female has thin hooks that curve upward. Three-year-old cows may or may not be accompanied by a calf.

It is common to see muskoxen in groups. The following list describes the groups of muskoxen that you are likely to see:

Single or pairs (these are almost always mature bulls)

Not all groups are mixed-sex. Remember, not all groups have bulls and cows, the biggest animal in the group might not be a bull and single sex groups do occur.

Remember to use more than one feature to identify the appropriate sex. Most confusion in identification occurs between mature cows and immature bulls.

Immature bulls have incomplete growth of the horn boss and show considerable amounts of white hair between the horn bases.

Immature cows will not have a visible horn base, and will have considerable white hair between the horns.

Mature bulls develop a thick boss at the base of each horn with little hair in the gap between the bosses.

Mature cows do not grow a boss. Instead, they will have horn bases. Horn bases are about the same thickness as the rest of the horn and are often touching.

Note: It is unreliable to identify sex based solely on the color of horn tips or presence of white hair between horns.

To assure the most efficient killing capability and to reduce the chances of wounding loss, a rifle cartridge with a minimum .30 caliber bullet or larger is recommended. When hunting muskoxen, hunters should be proficient with the firearm they plan on using and avoid poor shot placement.

Use good judgment and strive for a clean shot while muskox hunting. Patience is a necessity because it is common for muskoxen to group up after the disturbance of a shot. This makes identification of the wounded animal for follow up shots very difficult. Take your time, know what lies behind your target, wait for muskoxen to disperse, and allow your first shot to be the best shot for a clean kill.

Study the photos in the id section and take the online muskox identification quiz. If harvesting a bull, we recommend hunting an all-bull group of muskox and not a mixed-sex group. After the first shot, the targeted muskox may walk back into the group. By taking your time and waiting-out the injured animal, you will avoid the unnecessary risk of wounding other animals. Smaller animals are commonly hidden behind larger animals. Be sure to look for extra legs before shooting. Look closely at the photo below.

This quiz is composed of ten questions.