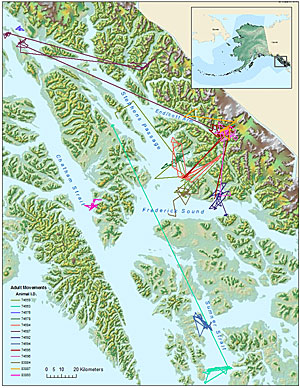 Glacial fjords such as Endicott Arm and Tracy Arm in Southeast Alaska provide important pupping habitat for harbor seals and surveys suggest that females travel from other locations to pup on the icebergs in the spring. This is also the likely area where seals mate since mating occurs shortly after the pups are weaned. Little is known about where seals that use glacial habitat during pupping and mating season spend the remainder of the year, thus we attached satellite (SPOT) tags to harbor seals to monitor their movements. Unlike the satellite (SPLASH) tags discussed in Importance of Glacial Habitats, SPOT tags only transmit data about where the seals are located, and whether seals are hauled out or in the water.

This project is ongoing; more satellite tags were deployed on harbor seals captured in Endicott Arm in spring and summer 2009. We will continue to receive locations for those animals through the winter.

This study is conducted under MMPA NMFS permit #358-1787. Special thanks to the NMFS National Marine Mammal Laboratory for providing us with some of the satellite tags and location data. For more information about this project, please contact Gail Blundell (gail.blundell@alaska.gov).