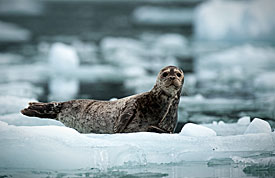 Tidewater glacial fjords are important habitat for pupping harbor seals in Alaska, seasonally supporting disproportionate numbers of mothers and pups relative to total number of seals in the area. The pronounced pattern of seasonal use and the high proportion of pups born in glacial fjords suggest that seals may travel from other areas to give birth in this habitat, and that some pups born in glacial fjords may emigrate to other areas. It is important to understand why, how, and when harbor seals use glacial habitat, and whether the rapid thinning and retreat of Alaskan glaciers associated with climate change could negatively affect harbor seals beyond the confines of specific glacial inlets.

In earlier studies conducted in Glacier Bay by ADF&G, in collaboration with the National Park Service (NPS), we discovered that seals that we captured and radio-tagged in glacial fjords (hereafter referred to as glacial seals) traveled significantly further to forage than did seals that we tagged at terrestrial sites in Glacier Bay. On average, glacial seals foraged 26.9 km farther from their capture site (average foraging distance 40.6km; maximum single distance 106km) than terrestrial seals (average distance 4.6km; maximum = 30.2km), but seals generally returned to the habitat in which they were captured to haul out. This finding was not expected, and led us to wonder why harbor seals use glacial habitat if most of them need to travel to find food.

Is there some trade-off (cost vs. benefit) to using glacial ice for haul outs? When seals are hauled out, the risk of being attacked by aquatic predators is substantially reduced, and when hauled out on icebergs, the risk of attack from terrestrial predators is almost nonexistent. Icebergs float independent of tide cycle, whereas many terrestrial haul outs are submerged at high tide, forcing seals into the water even if aquatic predators are present. Risk of predation for glacial seals may therefore be less than that of terrestrial seals, which may compensate for the costs of traveling further to forage. We also found that seals that we tagged in glacial habitat had better quality diets than their terrestrial counterparts. Even though glacial seals traveled further to forage, once they have found sufficient prey they can return to their iceberg haulouts and rest. Although terrestrial seals foraged closer to home, they can only access their haulouts when the tide allows; at higher tides they must remain in the water, maintaining vigilance for predators until haul out substrate is available again. The costs to glacial seals of traveling further to forage may be compensated for by obtaining better-quality diets and having access continuously to available substrate to haul out, once foraging needs are met. Body condition (percent fat) was similar between seals captured in glacial and terrestrial habitats in Glacier Bay, which appears to indicate that the cost versus benefit of living in these two habitats is similar although foraging strategies and diet are different. 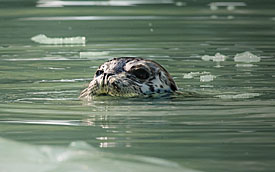 We wondered whether the foraging patterns and habitat use that we observed in Glacier Bay were typical of seals hauling out on ice calved from other tidewater glaciers. Given the apparent importance of glacial habitat to pupping harbor seals, understanding the benefits (and costs) of using this habitat is important for predicting population-level impacts to harbor seals in Alaska as loss of glacial ice continues. While NPS continued studies in Glacier Bay, we moved to Tracy Arm Ford’s Terror (TAFT) Wilderness Area to conduct several studies (See also Measurement of Heart Rate and Satellite Tagging).

In 2008 and 2009 we tagged harbor seals (32 individuals in 2008 and 40 in 2009) with very high frequency (VHF) transmitters, each with an individual radio frequency. Most of our tagging occurred in Endicott Arm, thus we established two land-based telemetry-monitoring stations in that arm (one near the glacier face and another several miles away) and one monitoring station in Tracy Arm. These stations continuously scanned for the VHF frequencies that we deployed in the area, logging presence of individual seals, and the date and time of day that each frequency was detected. Some seals received 2 transmitters; one on the seal’s head, the signal from which can be heard when they are swimming at the surface and when they are hauled out, and another transmitter on their back, the signal from which can only be heard when they are hauled out.

When we live-captured seals in TAFT, we obtained biological samples to assess health and diet. In addition to VHF tags, we also deployed satellite (SPLASH) tags on 8 individuals captured in the spring of 2009 that transmit locations and summarized dive data to satellites, and archive detailed dive data similar to data utilized for the heart-rate study and studies previously conducted in Glacier Bay – we recovered 5 SPLASH tags (4 from females, 1 from a male).

For additional information about this project, contact Gail Blundell at 907-465-4345 or email her at gail.blundell@alaska.gov.