The Essentials for Traveling in Alaska's Bear Country

Fast Facts for the Field

Alaska is bear country and one of the few places in the world where all three species of North American bears live. You may have a chance to see a bear in Alaska. But even if you don’t you will never be far from one.

Bears are curious, intelligent and tend to avoid or ignore people, but can be dangerous. Many bears live in Alaska and many people enjoy the outdoors, but surprisingly few people see bears and only a few of those are ever threatened by a bear.

Respecting bears and learning proper behavior can help you avoid conflict—and help you know how to react if you do see a bear.

It's best to understand what bears need and avoid bears whenever possible. You can do this by keeping a clean camp and home, and by following bear safety advice when recreating or working in bear country. 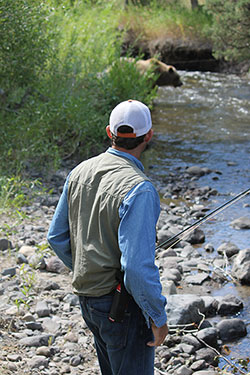 If you see a bear, avoid it and give the bear every opportunity to avoid you. If you do encounter a bear, remain calm and try to observe what the bear is doing. Chances are good you are not in danger. Most bears are interested only in protecting food, cubs or their “personal space.” Once they feel there is no threat, they will move on. Remember the following:

If You See a Bear

In the Rare Event of an Attack

If a bear makes contact, you have two choices: play dead or fight back. The best choice depends on whether the bear is acting defensively or is seeking food. 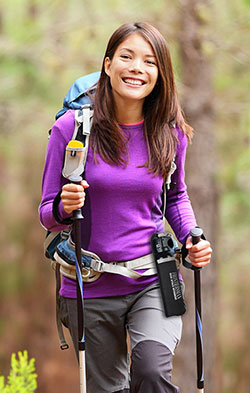 Bear deterrents, including firearms and bear spray, can be helpful but should never be used as an alternative to common-sense approaches to bear encounters.

Products labeled as bear spray contain capsicum (red pepper extract) and are effective at deterring bears at close range. Bear sprays are designed to propel a mist for 15 -30 feet. If discharged upwind or in a vehicle, they can adversely affect the user. Take appropriate precautions. If you carry bear spray, keep it handy and know how to use it.

If you are inexperienced with a firearm, it can be difficult to successfully deploy in emergency situations. Additionally, a wounded bear can be a greater threat to human safety. A .300-Magnum rifle or a 12-gauge shotgun with rifled slugs are appropriate weapons if you have to shoot a bear. Heavy handguns such as a .44-Magnum may be inadequate in emergency situations, especially in untrained hands.

In most cases, bears are not a threat, but they do deserve your respect and attention. When traveling in bear country, keep alert and enjoy the opportunity to see these magnificent animals in their natural habitat.