Mountain goats inhabit extraordinarily rugged and remote mountain areas and exhibit an uncommon tenacity to prosper and survive in some of the most extreme environments on earth. The species is highly specialized but also particularly vulnerable to changes in natural and non-natural conditions. As a result of these attributes, study of mountain goats is critical but also very difficult; the species is among the least studied large mammals in North America. In most parts of Alaska, basic information needed for species conservation is limited and remains an important challenge.

Beginning in the 1970’s, the Alaska Department of Fish and Game has been among the leaders in mountain goat research and has made important contributions to our understanding habitat selection, population dynamics, population estimation, field techniques and other topics. In recent years, technological advances have been applied to further advance our knowledge of these subjects and provided opportunities expand into new disciplines (such as genetics). Partnerships with other government agencies, universities and private entities have been critical for sustaining the current mountain goat research program.

Typically, independent mountain goat research projects are initiated in response to acute conservation issues in specific areas (see map). However, through coordination and standardization of data collection protocols between projects it is possible to synthesize data across broader geographic area and maximize the applicability of research efforts statewide. Collectively, these efforts have resulted in substantial advancements in mountain goat conservation and management in Alaska, yet much work remains to be done. 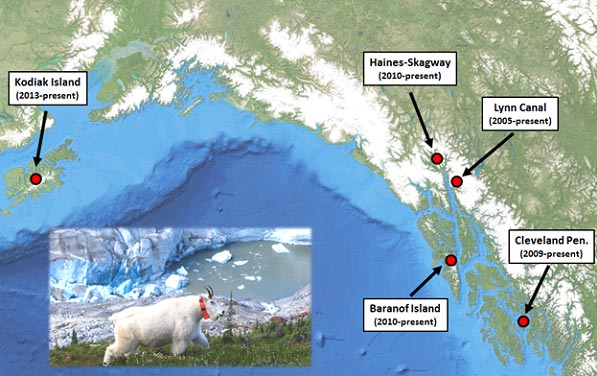